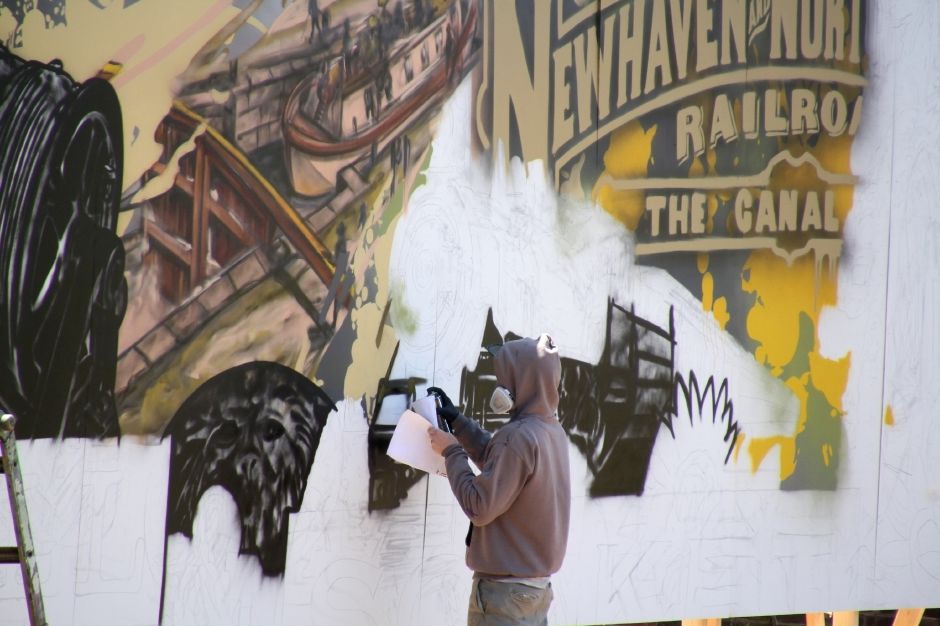 CHESHIRE – The fence erected around the former Ball & Socket factory on West Main Street gives the appearance of a building site to most travellers.

Indeed, there is a tremendous amount of work underway at the facility in anticipation of Ball & Socket Arts finally opening its first building to the public in the near future. But for three days last week, other work in progress captured the spotlight.

On May 9, 10 and 11, Wallingford muralist Ryan Christenson, who goes by the name ARCY, painstakingly created a special mural that will take up permanent residence at Ball & Socket Arts. The piece – an 8ft by 12ft mural – captures the history of the area, from canals and trains to modern cyclists using the linear path that passes right by the old factory.

Somogyi reached out to Christenson earlier this year about the facility’s “grand opening” this spring. For more than 10 years, Ball & Socket Arts has worked to transform the former factory site on West Main Street into a center for arts and retail.

Last year it was announced that the first building – Building 2 – would open in 2022 and Ball & Socket’s first tenant would be Cheshire’s famous ice cream parlor, Sweet Claude’s Ice Cream, which is currently located on the Highway 10 south. end of town.

“When we realized we’d be able to open this spring…we said, ‘Oh my God, we better start some arts programming here,” Somogyi said with a laugh.

“Our theme for this year is Past/Future, as we are in this moment of transition,” Somogyi said. “I sent (Christenson) some raw footage (of the area’s history) and he sent me back a first draft for my opinion.

The mural appears to move from left to right, with images of the area’s historic canal as well as factory-made knobs leading to more modern depictions of how the area is used. Christenson painted all of the work outdoors, sometimes battling gusts of wind.

Part of the appeal, Somogyi admits, was having Christenson on site working in public view.

What impressed Somogyi most were the details of the large-scale work, giving an almost photographic appearance to many elements of the art.

The mural will reside in what is called the Artcade in Building 2 – the expansive entrance that will lead to Sweet Claude’s on the first floor as well as the second floor tenant. Large picture windows will showcase the artwork, with lights that will cut it out at night. The hope is that people will be able to view the mural from the outside.

Somogyi admits there have been “a number of blockages” when it comes to opening Building 2 and the new Sweet Claude facilities. There’s still a chance, she said, that the facility will be ready for visitors by Memorial Day weekend, but that remains very much up in the air.

“I know I’ll be eating ice cream here very soon,” Somogyi said, “but unfortunately I just can’t give you an exact date for when that will be.”

However, Somogyi revealed that Ball & Socket Arts is “very close” to finalizing an agreement with a second tenant for Building 2, which would occupy the structure’s second floor. No indication was given of who that tenant might be or when, but Somogyi said retail interest “is high.”