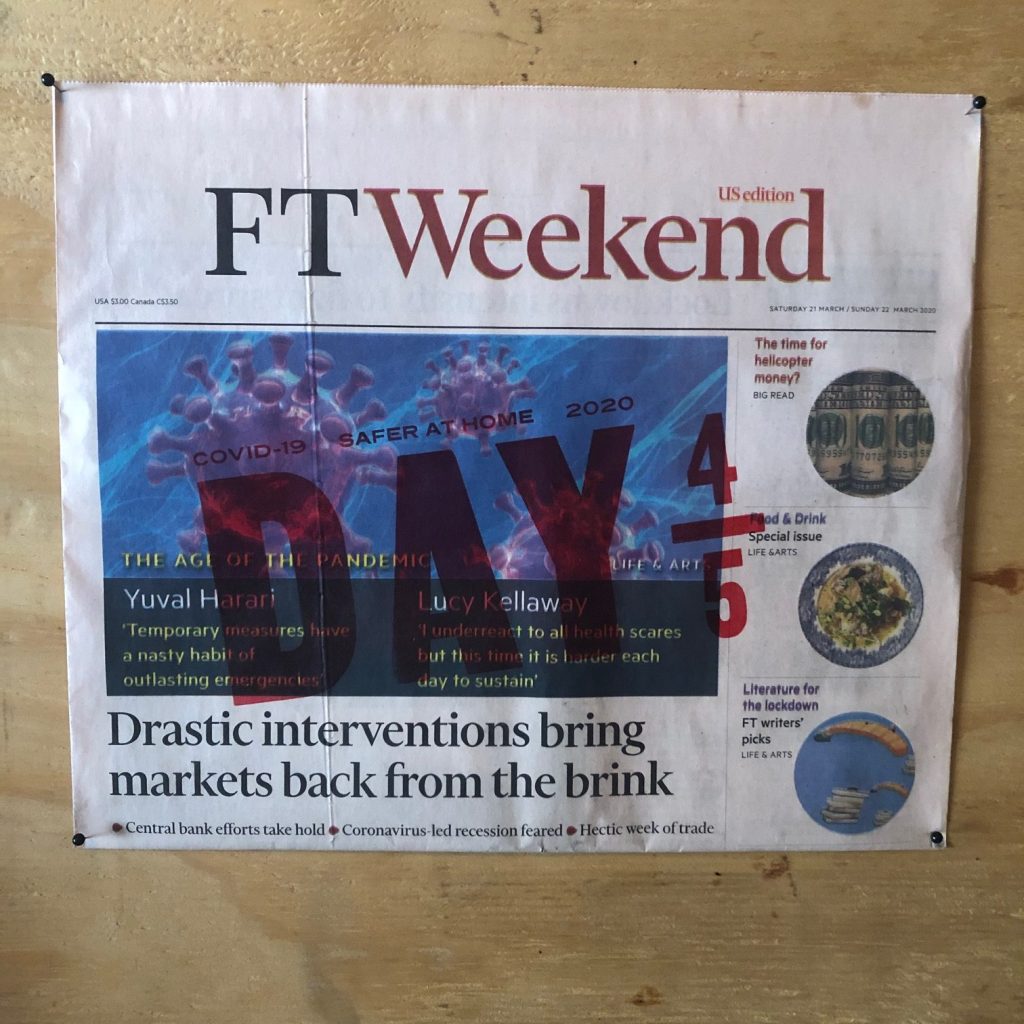 Artists tell the news since there is art and news.

John Lennon “read the news today, oh boy.” Or maybe, as he says now, Paul McCartney picked up the morning paper and wrote the lyrics to “A Day in the Life.” No matter. Artists have always found the surreal stories among the everyday simple in what we tell. Lennon/McCartney sure did: “Four thousand holes in Blackburn, Lancashire/And though the holes were kinda small/They had to count them all/Now they know how many holes it takes to fill Albert Hall. “

Painters also paint on newspaper pages since we print them. Walking through a terrific little show based on the contemporary interaction between everyday journalism and art, “Redact, Rewrite, Reframe,” on ArtCenter’s South Raymond Avenue campus on Monday with Julie Joyce, Director of Galleries and vice-president of exhibitions at the college, she told me that for many 19th-century painters, it was about having access to cheap paper.

Others didn’t actually paint on the fish casing in their Cubist studios, but Braque’s ‘Violin and Journal’ and Gris’ ‘Journal and Fruit Platter’ appropriated images from Le Journal, the Parisian newspaper.

This show, open until October 2, is the one you should visit if you’re interested in how contemporary California artists craft their work as a commentary on major world events and how those events are reported. . And who among us isn’t interested in that? After the daily drumbeat of war, famine and scary politicians, it’s kind of a tonic to step back and see everything sideways, through the eyes of the artists.

Not that any of the eight artists featured on the show aren’t interested in watering down the news. Completely the opposite. Some of the works amplify the ugly by reminding us outside of our daily headline reading just how rotten our political leaders can be. The inspiration for the entire show is “I Read the News Today Oh Boy” by Rich Silverstein, which reflects the Donald Trump era from November 25, 2019 to the Capitol insurrection. Silverstein, artistic director and artist from San Francisco, reads The New York Times newspaper every morning. From the day of Trump’s first impeachment, he began ripping images and text from his diary headlines with an X-Acto knife, or sometimes tearing by hand, “to isolate the word,” says -he. It then explodes and frames behind glass the words – “provocative ploy”, “Little Adam Schitt” – “for maximum impact”.

The result is an amazing and deeply touching part of the show.

So does “Above the Fold” by Gloria Kondrup, a longtime ArtCenter professor and director of the school’s Archetype Press.

On the first day of the COVID-19 lockdowns in the spring of 2020, when ArtCenter and everywhere else suddenly had to shut down, Gloria picked up the college copy of the business-oriented newspaper the Financial Times from the sidewalk. As we would all be staying with us, she had the subscription changed to her own address. And she made art from the front pages of the next 100 days, focusing on the global COVID economy, running the already printed page through her home printing press, inking bright red : “DAY 1”, and so on, for more than three months. (Day 24, the newspaper missed delivery and she had to print it on a blank sheet.) After 100 days of that, Gloria told me on Monday that it was too exhausting to continue. But you can see the wonderful fruits of his labor at ArtCenter.

The rest of the show is important and moving as well. Simon Johnston’s “Lachrymae Lachrmarum” simply blackens the front pages of newspapers reporting on Trump’s inauguration day. Paula Scher’s “All the News the Fits” commemorates America’s days after 9/11. Steve Hurd’s “Untitled (RIP)” comments on pixelated images released of the first US servicemen killed in the Middle East. York Chang paints the Latin alphabet more familiarly than Asian calligraphy. Samiray Yamin places sculpted glass on pages of photos taken from Time magazine depicting migrants in distress in the Mediterranean. Jemima Wyman creates photo collages from news photos of clouds of smoke and gas during mass protests.

We mere ink-stained scribes may be shrewd, but we are not artists. It is a visceral as well as intellectual thrill to see our work transformed by those who are.

Write to the public editor at [email protected]

How to Create a Great Online Foundation Course

AOC 2024: who would she choose for vice-president? We have 5 ideas