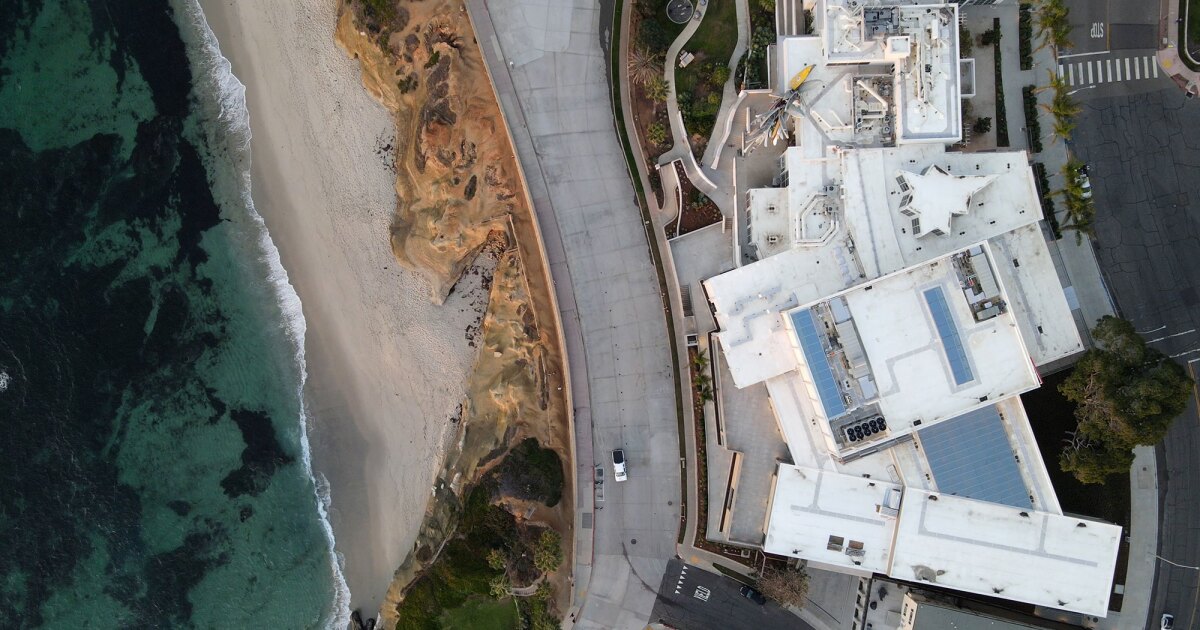 The Museum of Contemporary Art San Diego (MCASD) calls the newly renovated La Jolla campus “art with a view.” Designed by architect Annabelle Selldorf and New York firm Selldorf Architects, it’s a space worthy of both the view and the art that now clings to its seemingly endless walls.

Originally the former home of Ellen Browning Scripps – designed by famed architect Irving Gill in 1916 – it became a museum in 1941 and was renovated several times over the following decades. A major refurbishment by the firm Venturi, Scott Brown in 1996 restored the original facade as well as the addition of Axline Court, both elements maintained by Selldorf while quadrupling the gallery space from 10,000 to 40,000 square feet.

This means that MCASD has room to show much more of its vast collection of contemporary art, including several works classified as “debuts” for the museum, previously unseen pieces or new acquisitions.

To save space, they dug underground, moved a massive tree onto the property, and the old auditorium was also turned into a gallery space – which museum management said is more in line with their needs as than a museum.

“One of the ways we’ve been able to gain so much gallery space is we’ve turned Sherwood Auditorium into the Iris and Matthew Strauss galleries. So it’s almost 8,000 square feet of gallery space with 20-foot ceilings. feet, skylights, wooden floors – and this is where we will host our special exhibits,” said Kathryn Kanjo, Director of David C. Copley and CEO of MCASD.

The first special exhibit is “Niki de Saint Phalle in the 1960s,” a major study of the works of the Franco-American artist who made San Diego his home near the end of his life.

The exhibition, on view until July 17, 2022, delves into a period of his work that is quite different from the whimsical and fantastical sculptures we know from the region – with abstract assemblages, his radical “shooting paintings” and sculptures large-scale feminists.

In addition to the Saint Phalle exhibit, MCASD is also installing over 200 works from its permanent collection, which are now located in a mostly permanent arrangement, with some pieces rotating periodically for preservation reasons.

Many beloved works have returned, including “1º2º3º4º”, a site-specific 1997 Robert Irwin work that cuts several square holes directly into glass windows overlooking the Pacific Ocean – plus an entire room of works by Robert Irwin. ‘Irwin.

Irwin, who lives in San Diego, is known worldwide as one of the greatest artists of the California Light and Space Movement, spanning several decades from the 1950s to the 1970s. MCASD has an impressive collection of Light and Space works. Space, including pieces by Larry Bell, Craig Kauffman, Mary Corse and DeWain Valentine, many of which are displayed in an impressive and airy indoor gallery with louvered skylights.

Browsing through the galleries, the progression in the curatorial choices is obvious: each room suggests a particular period or movement.

The museum’s collection illustrates their attachment to the art of the time, but also to that of the region with many works exhibited by artists from San Diego and Tijuana. Some highlights: “Dirty Water Can’t Be Washed Away,” an oversized cyanotype by Andrea Chung; “Untitled Figure”, a work by Tijuana-born artist Salomón Huerta featuring a seated subject with his back to the viewer. The massive artwork is installed low on the wall, as if the chair in the painting was located at floor level, making the room appear larger than life.

Plus, don’t miss John Baldessari’s nine-and-a-half-foot-tall “Terms Most Useful for Describing Creative Works of Art,” which is prominently displayed opposite two works by Andy Warhol. ; a popsicle sculpture by Claes Oldenburg; The elephant “Big Ganesh” by Niki de Saint Phalle – and the view.

Art lovers might recognize many names in the collection: Cindy Sherman, Claes Oldenburg, Jenny Holzer, Helen Pashigan, Roy Lichtenstein, Marisol, Mark Rothko or Yayoi Kusama (the list is too long), and in the labyrinthine space, it’s not a stretch to wonder out loud, “Wait, there’s more?” rounding another corner into another gallery – but there are plenty of places to walk away, rest and admire the view.

This weekend, to celebrate the reopening, the entrance to the museum is free. Saturday, April 9 includes a ribbon-cutting ceremony, entertainment and self-guided tours of the galleries of 10 a.m. to 8 p.m.. Sunday, the first family event Prebys Game Day is from 10 a.m. to 1 p.m., with hands-on workshops. Third Thursday free and Second Sunday free programs also begin this month.

EGG-cellent treats for the whole family