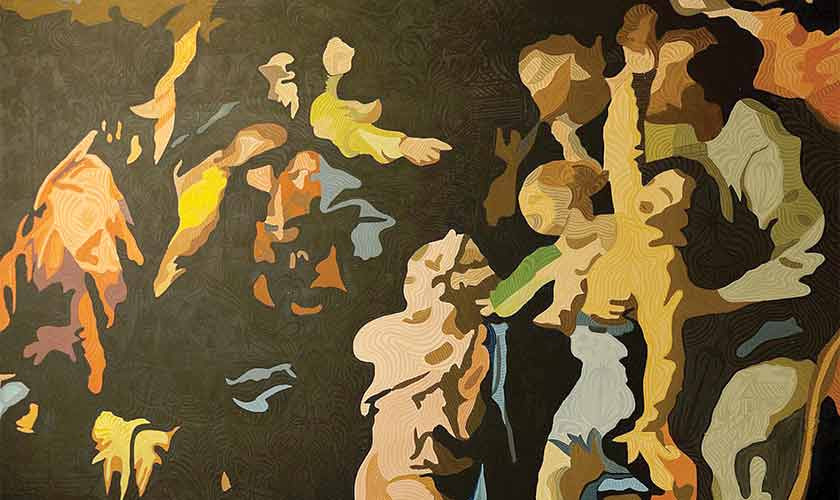 Of shapes and ideas | Shehr

This year, the works of 84 graduate students from the departments of textile design, fashion design, visual arts, visual communication design and jewelry and accessories design were exhibited. The showcase was glorious proof not only of the students’ creative imagination and understanding of art, but also of their understanding of the world around them. The spirit of these young artists has been carefully and wholeheartedly expressed on topics as diverse as gender, digitization and nostalgia, through the lens of a film/TV camera.

A Form Arrives Unknown by Faheem Abbas seemed to bring to life forms that had been driven from his imagination. Ultimately, it was about visualizing the simplest forms of reality in shapes that seemed to oscillate between the familiar and the unfamiliar. Speaking about his work, Abbas said, “To some this piece would look like a horse, to some it might be an elephant; this is how communication is established between individuals – through form, a vessel of ideas and thoughts, which then leads to my connection with them.

Artist Ghaffar Masih has made a unique connection to the popular national song title, Dil dil Pakistan, in his work, highlighting the inherent contradictions in the concept of patriotism..

In his Rung series, Usman Allauddin explored the paradoxes of cinema viewing in the modern world. He took the example of the still unreleased film by director Sarmad Khoosat, Zindagi Tamasha — whose theatrical release was halted due to the controversy it sparked — and has worked to deconstruct some of its visuals, insisting that “color” is the foundation of communication, while by highlighting the obstacles to censorship. “I favor simple expression over complex thought,” he said on the occasion.

In an attempt to voice the concerns of ‘others’, especially the religious minorities in our country, artist Ghaffar Masih has uniquely linked the title of the popular national song, Dil dil Pakistan, in his work. He pointed out the contradictions inherent in the concept of patriotism.

Fatima Asim’s work has debated popular issues with shifting gender binaries and identities, while Maryam Ashraf has sought to bridge the gap between nature and digitization.

Works by other artists on display were no less fascinating and engaging. It was a joy to witness the growth of art as a subject in Pakistan and how art molds individuals capable of creating beautiful works that also spark conversations between artists and their audiences.

How the Hilliard Art Museum connects to the community