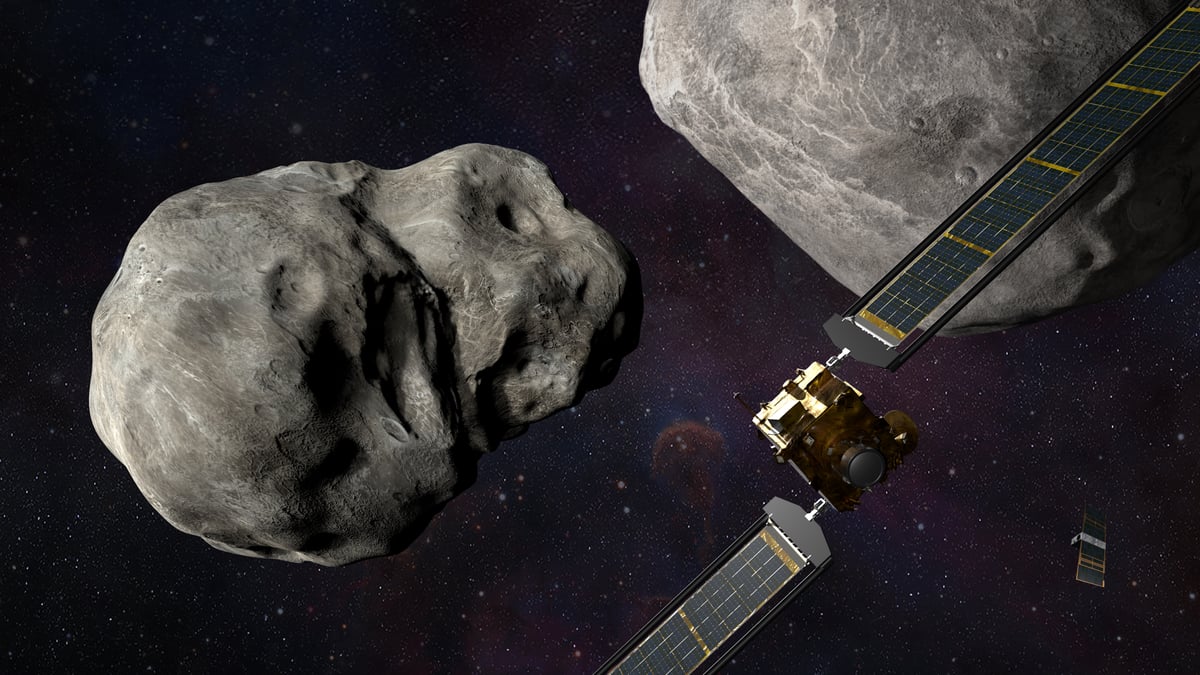 A NASA-built spacecraft is set to intentionally crash into a small asteroid next week as part of a planetary protection test mission.

The purpose of the mission is to demonstrate that dangerous incoming rocks can be deflected by deliberately crushing them.

The spacecraft, known as the Double Asteroid Redirection Test (Dart), is expected to collide with the 170-meter-wide (560ft) asteroid at 12:14 a.m. UK time on Tuesday, September 27.

The asteroid, named Dimorphos, poses no threat to Earth and is part of a binary asteroid system that orbits Didymos (a larger companion asteroid), which takes around 11 hours and 55 minutes.

NASA astronomers hope that Dart, while destroying itself in the process, will shorten that orbital period by about 10 minutes.

NASA said: “Dart’s target asteroid poses no threat to Earth, but provides the perfect testing ground to see if this method of asteroid deflection – known as the technique of kinetic impactor – would be a viable way to protect our planet in the event of an asteroid collision course with Earth have been discovered in the future.

The Dart mission will be the first-ever large-scale demonstration of asteroid deflection technology.

The spacecraft recently captured its first images of Didymos and Dimorphos in July when it was about 20 million miles (32 million km) from the asteroid system. He used an onboard instrument, known as the Didymos Reconnaissance and Asteroid Camera for Optical navigation (Draco), to take the pictures.

It took Dart 10 months to close in on Dimorphous after launching last November on SpaceX’s Falcon 9 rocket.

What will happen when the mission takes place?

The asteroids will be about 6.8 million miles (11 million kilometers) from Earth at the time of the collision. Dart will accelerate to around 15,000 miles per hour (24,140 kilometers per hour) before colliding with Dimorphos.

This collision will be recorded by a briefcase-sized satellite known as the Light Italian CubeSat for Imaging of Asteroids (LICIACube), which was provided by the Italian Space Agency.

LICIACube, which weighs only 14 kg (31 lb), hitchhiked with Dart in deep space before recently separating from the spacecraft in a final farewell.

In 2024, the European Space Agency (ESA) will launch its Hera spacecraft, which will make a two-year journey to the asteroid system to gather information following the crash.

ESA said: “By the time Hera reaches Didymos in 2026, Dimorphos will have achieved historic significance: the first object in the solar system to have its orbit shifted by human effort in a measurable way.

How many asteroids are there near Earth?

There are currently about 27,000 asteroids in near-Earth orbit. Rocks 140 meters (460 ft), larger in size and approaching more than 4.7 million miles (7.5 million km) during orbit are classified as potentially hazardous asteroids (PHAs).