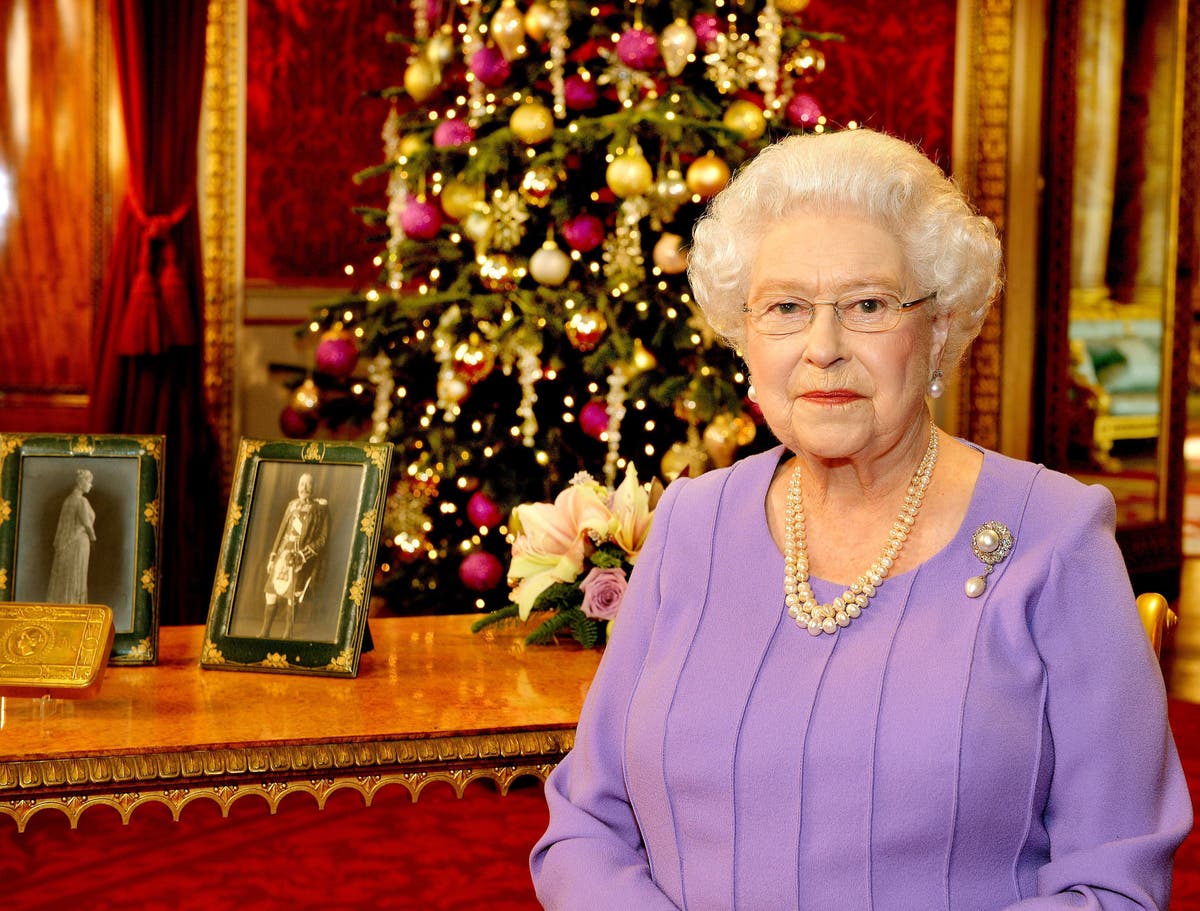 “My name, Elizabeth, of course” – the Queen’s moving words and amusing jokes

Here are some of the Queen’s top quotes over the years:

“I declare before you all that my whole life, whether long or short, will be devoted to your service and to the service of our great Imperial family to which we all belong.” – As Princess Elizabeth on her 21st birthday in South Africa.

“My own name, Elizabeth, of course.” – Her private secretary asked her what she wanted to be called after becoming queen.

“Throughout my life and with all my heart, I will strive to be worthy of your trust.” – The Queen’s broadcast to the nation on Coronation Day in 1953.

“It is inevitable that I will be a rather distant figure for many of you.” – The Queen’s first televised Christmas show in 1957.

“I cannot lead you into battle, I do not give you laws or administer justice, but I can do other things – I can give you my heart and my devotion to these old islands and to all the peoples of our brotherhood of nations.” – The same Christmas show.

“I can easily understand these aspirations. But I can’t forget that I was crowned Queen of the United Kingdom of Great Britain and Northern Ireland. – Addressing Scottish and Welsh devolution proposals in his Silver Jubilee Address to Parliament in 1977.

“When I was 21, I dedicated my life to serving our people and asked God’s help to fulfill this vow. Although this vow was made in the days of my salads, when I was green in judgment, I do not regret it or take back a single word from it. – At a Corporation of London luncheon at the Guildhall to mark its Silver Jubilee in 1977.

“In a way, I had no apprenticeship. My dad died way too young, so it was all of a sudden about accepting and doing the best job possible. – In a BBC documentary in 1983.

“Like all the best families, we have our share of eccentricities, brash and temperamental youngsters and family disagreements.” – Speaking of the Commonwealth in 1989.

“1992 is not a year I will look back on with unmitigated pleasure. In the words of one of my friendliest correspondents, it turned out to be an “Annus horribilis”. – The Queen’s speech at the Guildhall in London in 1992 to mark the 40th anniversary of her accession.

“We’ve all felt these emotions over the past few days. So what I’m saying to you now, as your queen and as your grandmother, I say from the bottom of my heart. – To the nation after Diana’s death, Princess of Wales, in 1997.

“He has, quite simply, been my strength and my strength all these years, and I, and all of his family, and this country and many more, owe him a greater debt than he would ever claim, or than we’ll never know.” – About the Duke of Edinburgh on their golden wedding anniversary in 1997.

“Grief is the price we pay for love.” – In a message to New York after the September 11 terrorist attacks.

“We both have a special place in our hearts for our children. I want to express my admiration for the Prince of Wales and all he has done for this country. Our children, and my whole family, have given me so much love and unfailing help over the years, and especially in the past few months. – His Golden Jubilee speech at the Guildhall in 2002 – the year his mother and sister Margaret died.

“They overcame Becher’s Brook and The Chair and all kinds of other terrible obstacles. They succeeded and I am very proud and wish them good luck. My son is home and dry with the woman he loves. – Speaking at Charles and Camilla’s wedding reception in 2005 on the same day as the Grand National.

“Remembering the appalling suffering of war on both sides, we recognize how precious the peace we have built in Europe since 1945 is.” – At a banquet during a state visit to Germany in 2004.

“Christmas is a time of celebration, but this year it’s a darker occasion for many. Some of those things that might once have been taken for granted suddenly seem less certain and, understandably, cause feelings of insecurity. – Christmas 2008 broadcast in the wake of the economic downturn.

“In this special year, as I rededicate myself to your service, I hope we will all remember the power of unity and the unifying strength of family, friendship and good neighborliness, examples of which I have been fortunate enough to see throughout my reign.” – Diamond Jubilee message in February 2012.

“I hope people think very carefully about the future.” – Before the Scottish independence referendum in 2014.

“Inevitably, a long life can pass through many milestones. Mine is no exception. – About becoming the longest-reigning monarch in the country in 2015.

“During his 70 years, Philip and I have watched Charles grow into a champion of conservation and the arts, a great charitable leader – a devoted and respected heir to the throne to compare to anything in history – and a wonderful father. . Above all, supported by his wife Camilla, he is his own man, passionate and creative. — About the Prince of Wales on his 70th birthday in 2018.

“Together we are fighting this disease, and I want to assure you that if we remain united and resolute, we will overcome it.” – Televised address to the nation in April 2020 during the first coronavirus pandemic lockdown.

“Never give up, never despair – that was the message of VE Day.” – Televised speech to mark the 75th anniversary of VE Day in May 2020 as the Covid-19 pandemic continued.

“But our streets are not empty; they are filled with the love and care we have for each other. And when I look at our country today and see what we are prepared to do to protect and support each other, I say with pride that we are still a nation those brave soldiers, sailors and airmen would recognize and admire. – VE Day 75th Anniversary Speech.

“Of course, for many this time of year will be tinged with sadness: some mourn the loss of those dear to them, and others miss distant friends and family members for their safety, while all what they would really want for Christmas is a simple hug or a squeeze of the hand If you are among them you are not alone, and let me assure you of my thoughts and prayers – Christmas message 2020, during the pandemic.

“The issues raised, particularly that of race, are concerning. Although some memories may vary, they are taken very seriously and will be addressed by the family in private. – The Queen’s response to the Duke and Duchess of Sussex’s 2021 interview with Oprah Winfrey.

“When, in due time, my son Charles becomes king, I know that you will give him and his wife Camilla the same support you have given me; and I sincerely hope that, when the time comes, Camilla will be known as Queen Consort as she continues her loyal service. – Approve Camilla as queen on the eve of her platinum jubilee in February 2022.

“While I may not have attended every event in person, my heart is with you all; and I remain committed to serving you to the best of my abilities, supported by my family. – The Queen’s message at the end of the Platinum Jubilee celebrations in June 2022.

And some of the queen’s lighter ones:

“If you see someone with a funny hat, Margaret, you mustn’t point at them and laugh.” – As a teenager, advising his sister, Princess Margaret, on garden party etiquette.

“How good he is, Crawfie. How high he can jump. – To her nanny about Prince Philip as she watched him jump over the tennis nets at Dartmouth College during their first publicized meeting in 1939.

“Get me started.” – To the Archbishop of Canterbury Geoffrey Fisher at his coronation when his train got stuck on the thick carpet in Westminster Abbey.

“I’m not a movie star.” – To Princess Anne in 1968, after her daughter urged her to join the miniskirt era.

“Oh Philip, shut up. You don’t know what you’re talking about” – To the Duke of Edinburgh as he spoke on a subject on the Royal Yacht Britannia.

“I won’t leave my cabin until he’s in a better mood. I’m going to sit here on my bed until he gets better. – After an argument with Philip aboard the Royal Yacht.

“Go back a bit, Ron – it was me they came to see, not you.” – To Major Ronald Ferguson when his horse nearly pranced past his horse at Trooping the Colour.

“Keep your cameras trained; you could see the biggest walkout ever. – To photographers after she was kept waiting for two hours in a boiling desert tent by the King of Morocco in 1980.

“Dog leashes cost money.” – To the Prince of Wales, who walked his dogs at Sandringham and returned off-leash.

“Alright, let’s go. Stop messing around. – After being told by her private secretary that she would have to start paying income tax in 1992.

“They stiffen up but they don’t curtsy.” – In 2001, about the knees of Cherie Blair, wife of Prime Minister Tony Blair.

“For God’s sake, don’t let mom have another drink.” – To a pageboy serving the Queen Mother at a reception.

“I was just putting on my tiara when the lights went out.” – On a power outage while dressing for a dinner party in Jamaica in 2002.

“There are powers at work in this country of which we have no knowledge.” – Reportedly to former royal butler Paul Burrell, whose theft trial collapsed in 2002 when the monarch recalled a conversation with him.

“How very reassuring.” – To a Sandringham customer who didn’t recognize her and noticed that she looked like the Queen.

“No, but he did.” (waves at the policeman beside her) – To American tourists, who met the headscarf-wearing monarch walking at Balmoral and asked her if she had ever met the Queen.

“I’m not changing anything. I’m tired of dressing like that, thank you very much. – On the way to being photographed in her Garter dresses by Annie Leibovitz.

“He’s a big boy – the first born is very special.” – When Prince George of Cambridge’s great-grandson was born, who weighed 8lbs 6oz.

“They were very rude to the ambassador.” – The Queen’s perspective on Chinese officials, filmed at a garden party in 2016 when she chatted with a police commander who described the difficulties of arranging the state visit.

“How I will feel if people still sing Happy Birthday to me in December remains to be seen.” – At Patron’s Lunch on The Mall celebrating its official 90th anniversary in 2016.

“So this toast is to wish my son a happy birthday, in every respect an Original Duchy.” – About Charles on his 70th birthday in 2018.

“I don’t know why anyone would want the job.” – Apparently to Boris Johnson after accepting his invitation to become Prime Minister and form the next government in 2019.

“I’m saving mine here…for later.” – To Paddington Bear, revealing she kept marmalade sandwiches in her famous purse in a comedy sketch performed at the Platinum Jubilee concert in 2022.

All the books in the Strand List by Matthieu Blazy