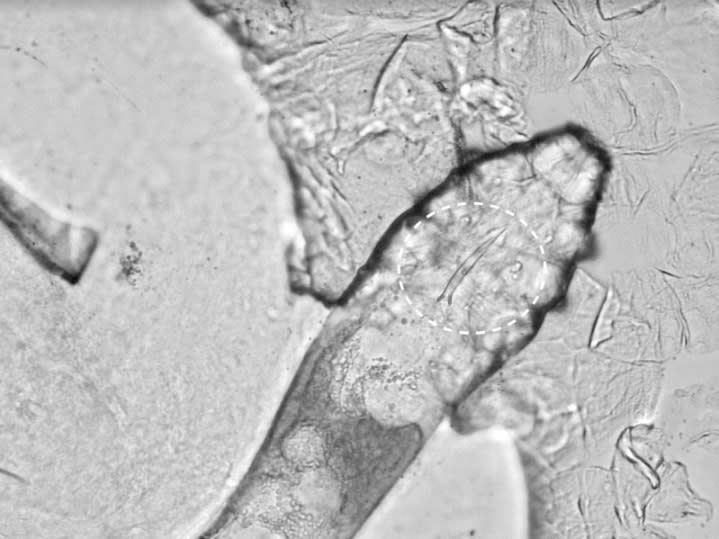 Bong Joon-ho’s 2019 thriller Parasite was widely acclaimed and received an Academy Award for Best Picture. It tells the story of the Kim family, which insinuates itself into the life of the wealthier Park family. Things, unfortunately, go downhill pretty quickly, resulting in multiple deaths and the fracturing of the Kim family.

The Kims ultimately failed to forge a more symbiotic relationship with the Parks, but they might have done better had they had enough time and stayed out of sight. This strategy certainly works in nature, at least in the case of the microscopic mites living on our faces.

Mites like Demodex folliculorum live their entire lives inside human pores and we benefit from them almost as much as they benefit from us. However, this has not always been the case. In the distant past, they were probably veritable parasites, but millions of years of life on and in human bodies have changed them and changed us. In a new study published in the journal Molecular biology and evolutionAlejandra Perotti from the School of Biological Sciences at the University of Reading and her colleagues sequenced the genome of D. folliculorum and found that it had changed dramatically since taking up residence in our skin.

“Their body image has changed dramatically. If you look at their loose relatives, they are more spider-like, while these are more tube-like,” Perotti told SYFY WIRE.

We’ve probably lived with these mites since we were human. In fact, all true mammals have at least one species of mite that lives in and on their skin. These mites most likely have a common ancestor but, over millions of years adapting to living on a specific species, they have diversified. Now our mites depend on us for survival, unable to survive anywhere else, even on other mammals.

“They can no longer survive outside our skin. We are witnessing the passage from parasite to symbiont. We provide shelter in a symbiotic relationship, and they clean out our pores,” Perotti said.

These mites exist on virtually all humans – there may be a subset of the population that doesn’t have them, but it’s very small if it does – and they are passed from mother to child during childbirth or breastfeeding. Because they have adapted to live only on our skin, scientists suspect they must have undergone significant genetic changes from their ancestral form. Some of these changes were obvious. Morphologically, they suffered a reduction to a simpler body plan.

“In free-living mites they have long legs, but these are very short. The legs are made up of three segments and the interesting part is that each segment is just one muscle cell. The whole leg is formed of three cells. They have to move their bodies to reproduce and feed inside the pore and it’s a very limited space,” Perotti said.

Other changes weren’t as clear and required genome sequencing to uncover. Scientists painstakingly assembled a population from a single human host for DNA sequencing. In larger animals it is possible to analyze a single individual and obtain enough data for sequencing, but in microscopic mites this is not the case. Scientists needed a larger population, but once they had it, their work was just beginning. Perotti had to isolate the individual mites from the sample and clean them with microscopic tools. Even then, getting usable gear was a breeze. The mites are incredibly fragile and about half of the sample population was lost during cleaning. Eventually, however, they obtained enough material to sequence the genome.

In addition to the body plan changes, the scientists found that the dust mites turned off genes they no longer needed, particularly those related to UV protection. Because they live their life inside our pores and are only active at night, they no longer have to worry about the sun’s bombardment.

“We have totally synchronized our entire lives. During the day we are awake and they sleep inside the pores. During the night, when we sleep soundly, they are very active. They move from pore to pore to mate and reproduce. They also most likely use our melatonin. In mammals, it puts us to sleep, but in small animals like mites, it actually makes them very active,” Perotti said.

The mites, however, are no longer able to produce their own melatonin. The genes for this activity have been lost. This is a problem because they need melatonin to obtain energy for food and reproduction. Luckily for dust mites, humans secrete huge amounts of melatonin while they sleep, and dust mites have adapted to borrow some of it for their purposes.

We have to admit that there is something a bit disturbing about the huge populations of mites – sometimes there are as many as 20 in a single pore – living inside our skin, but they are with us for as long as we are us.

“It’s a very old relationship. They are part of us,” Perotti said.

If they want to live in the figurative basement of our skin, it’s probably better for us and for them that we consciously look away.