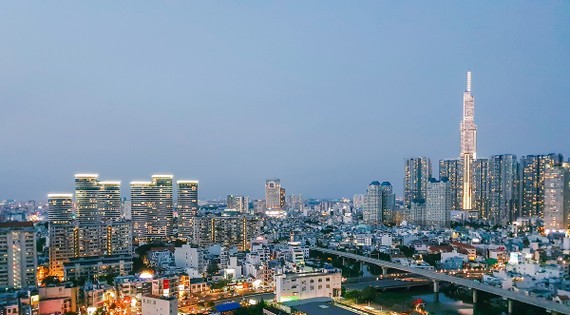 Recently, Mr. Phan Van Mai, chairman of the people’s committee of Ho Chi Minh City, stressed the need to deepen the study of the management of the traffic system, its economy and various projects related to it. Only when innovative ideas and new decisions are put into practice will traffic congestion in Ho Chi Minh City improve.

The main traffic problem in Ho Chi Minh City is the daily congestion caused during rush hour on almost all roads in the city. Most residents living and working in Ho Chi Minh City waste many hours daily trying to navigate traffic jams. Traffic jams hinder mobility, and the consequences lead to more pollution, more fuel consumption, and also more economic losses. Currently, the ratio of land under circulation to building land in Ho Chi Minh City is only 13%, while the standard ratio must reach at least 23%. The total road length is about 4,700 km and the road density is 2.26 km per square kilometer, which is lower than similar developing cities such as Bangkok, Taipei and Singapore.

A review was also conducted on socio-economic development to ensure national defense and security in the Southeast and Southern Economic Region at a conference in July as part of the implementation of Resolution 53 /2005 and the conclusion of 27/2012 of the Politburo. According to Mr. Phan Cong Bang, Deputy Director of Ho Chi Minh City’s Transportation Department, the city has recently studied the impact of traffic on the city’s development. This called for the implementation of projects to control and limit private vehicles, increase transit vehicles by 2025, and develop side-by-side ring roads to reduce the number of vehicles entering the city centre. Research results show that traffic jams cost Ho Chi Minh City about $6 billion a year.

According to Mr. Phan Cong Bang, the traffic index of Ho Chi Minh City is about a quarter of the whole country, which shows that there is great pressure on the traffic system. Therefore, traffic congestion in Ho Chi Minh City should be taken seriously, although since 2015 the city has been controlling the traffic situation, especially in airport and port areas. However, according to Ms. Phan Thị Thang, Vice President of Ho Chi Minh City People’s Committee, when the traffic system improves, the economy also develops. Therefore, although there are many decisions to be resolved regarding traffic needs, the congestion at the gates of cities makes traffic between provinces and cities difficult to navigate, which greatly hinders economic development.

According to Mr. Phan Van Mai, Chairman of People’s Committee of Ho Chi Minh City, currently the traffic system in Ho Chi Minh City consists of five types covering road, railway, waterway, sea and land. ‘aviation. The 568 decision to adapt the city’s transport planning was approved by the Prime Minister almost ten years ago, but the implementation of the projects is too slow and only about 35% has been completed due to lack of capital. Mai said if proper mechanisms and patterns are not studied, the city’s transportation system will face many obstacles in the future.

According to the government’s plan, by 2020, Ho Chi Minh City will build one or two elevated roads and also implement two or three urban railway lines. Subway Line 1 from Ben Thanh to Suoi Tien has been repeatedly delayed and not completed, while Subway Line 2 from Ben Thanh to Tham Luong has yet to start. Regarding road planning, Decision 568 clearly states that there will be six highways connecting Ho Chi Minh City to provinces with a total length of more than 350 kilometers, but so far there are only two highways between Ho Chi Minh City-Long Thanh -Dau Giay and Ho Chi Minh City-Trung Luong-My Thuan with a total length of about 146 kilometers. The Ben Luc-Long Thanh course of nearly 58 kilometers is still unfinished.

Mr. Phan Van Mai, chairman of the People’s Committee of Ho Chi Minh City, said that the lack of capital is the main reason why the traffic system cannot reach the target plan, as well as the lack of mechanisms and revolutionary models which also greatly affect progress. . The legal corridor also has many shortcomings and is not in line with international reality and practice. In addition, many mechanisms are unstable and lack appropriate policies to attract more investment resources.

Mr. Mai said that the capital requirements for the projects are very large and it is very difficult to rely solely on state capital. Ho Chi Minh City’s traffic system has been in the works since 2013, so it is no longer suitable. Some bottlenecks need to be addressed to introduce a new strategy, promote regional ties and incorporate the latest socio-economic development plans. He also said that in addition to ongoing projects, the city will focus on research and investment to connect downtown traffic to surrounding neighborhoods, such as the Saigon Riverside Road connecting the North West to reduce the pressure on Highway 22.

According to many experts, the traffic system is weak not only in Ho Chi Minh City but also across the country. When goods are slow to move, businesses are affected, business opportunities are lost, logistics costs become higher and people travel in difficult conditions.

Investment in the transport system is vital to reviving the economy, which will subsequently improve people’s lives. Closed ring road projects can create efficient inter-regional connections to help smooth out and reduce high logistics costs. Major projects must be accompanied by the development of public transport which also requires a reduction in personal motorization.

Along with this, there is a need to support day-to-day management with features such as increased parking fees, limited parking space for motorbikes in the center of town, more walking space for pedestrians, promoting the use of bus travel and collecting fees for motor vehicles entering city centres. While the budget is limited to invest in the development of the circulation system, it will be necessary to tap into potential land funds, increase public investment and create revolutionary policies to gather enough resources.