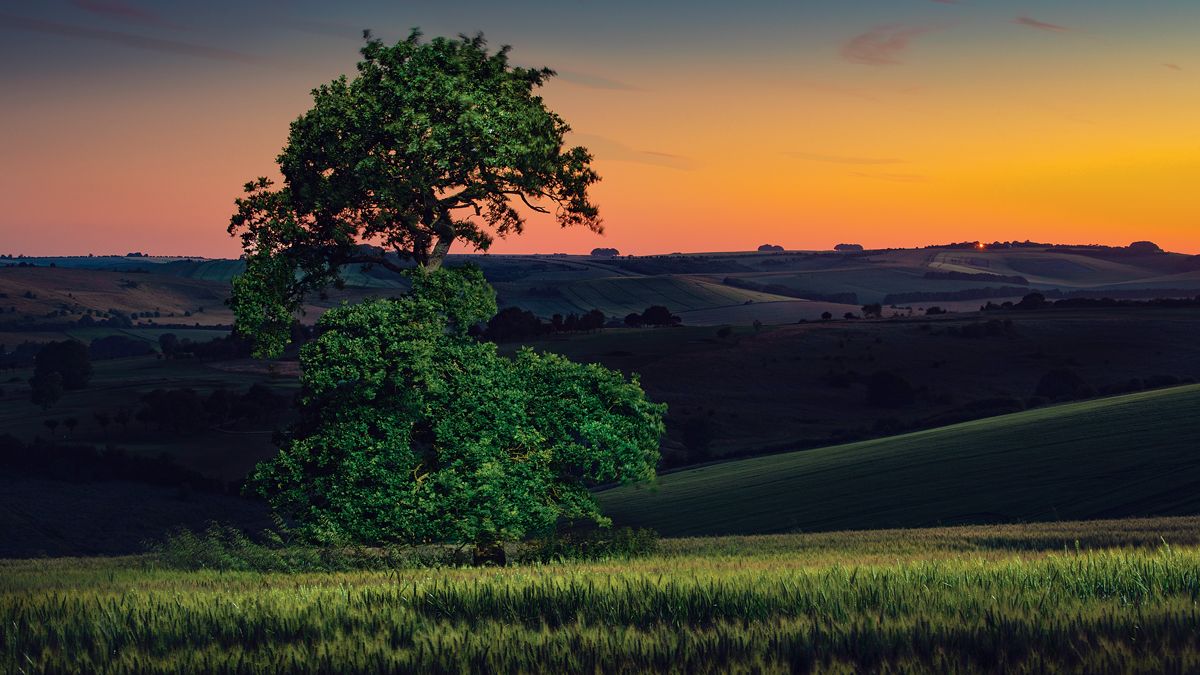 By attaching a few high-powered LEDs to a drone, we can turn it into a highly mobile lighting rig, capable of highlighting outdoor scenes and subjects from aerial angles for incredible landscape photography.

Not only does this open up all sorts of interesting photographic opportunities – from long-exposure ‘drone trails’ to lighting an otherworldly ‘flying saucer’ – it also means we can pair the aerial prowess of a drone with the (much better) capture quality of our DSLR.

In this project, we will explain how to do it. Obviously, this is something best tried at dusk or after dark, as that’s when the LEDs will make a real difference – and when the ethereal lighting will look the most effective.

We chose to shoot at dusk in this case. When the sun dips below the horizon, the colors of the sky can become beautifully vivid, but the foreground remains in deep shadow. By flying the drone above the tree and shining the lights on the grass ahead, we were able to light up the foreground while keeping the distant sky vivid and colorful.

Capture landscape photography with a twist

01 Choose a location
A lone tree creates a strong, clean shape against a twilight sky. Flying a drone in low light conditions means that obstacle avoidance capabilities are limited. So use an open area where there is less chance of cutting a tree branch or wires.

02 The drone
We’re using a DJI Mavic Pro quadcopter to light our scene; it is one of the best consumer drones. Above all, it is able to easily carry two LED Lume Cubes – a task that smaller and lighter drones would struggle with.

03 light sources
Our light source consists of two Lume Cube LEDs. You can use any LED (or even a lightweight Speedlite) but Lumes are a good choice as they are very bright, they can be controlled via an app and there are dedicated mounts for drones.

04 Variable angles
We can light our scene from any angle, but we are limited because we can’t move the lights too far from the scene or they will be too dim. An up and down angle of the light gives our landscape scene an otherworldly feel.

05 Tripod
Shooting in low light means a tripod is essential. With an exposure time of 10 seconds here, one can fly the drone around the scene to paint with light. We can also shoot several images in alignment and stitch them together later.

06 Twilight
Once the sun dips below the horizon, the sky can often display intense colors, so we chose a westward view to capture them. The light fades quickly, so you’ll need to shoot quickly, especially if you’re planning to merge multiple images.

Light painting with a drone!

Most drones have a flight time of around 20-30 minutes before the battery runs out (it will then come home and not fall out of the sky). So it’s a good idea to get a spare battery or two – you don’t want to run out of juice and miss shots at a crucial moment.

The dedicated mount we used allowed us to attach two Lume Cubes to the drone. Whatever lights you use, consider the drone’s weight and center of gravity. The extra weight will shorten flight time – it cut ours by about 10 minutes, giving us 17 minutes.

Lume Cubes can be connected to your phone via Bluetooth and then controlled with an app, allowing you to turn them on and off. They can also be configured to strobe, so it is possible to use them in optical slave mode in combination with a speed light if desired.

It helps to have a friend pilot the drone so you can focus on shooting. To make flying easier, many drones have intelligent flight modes that let you orbit an object, lock on and track a moving subject, or set and follow waypoints in the sky.

With an exposure time of 10 seconds, we can “paint with light” by moving the drone around the scene. It doesn’t matter if the drone enters the frame during the shot, because it is easily removed by replacing it with a clean area from another frame. The ideal settings will depend on the brightness of your LEDs and the intensity of the daylight. Shooting at dusk here, we are in Manual mode at 10 sec, f/11 and ISO250. The manual mode allows us to keep our exposure constant when we trigger images. Remember to mount your camera on a tripod for optimal stability throughout your capture.