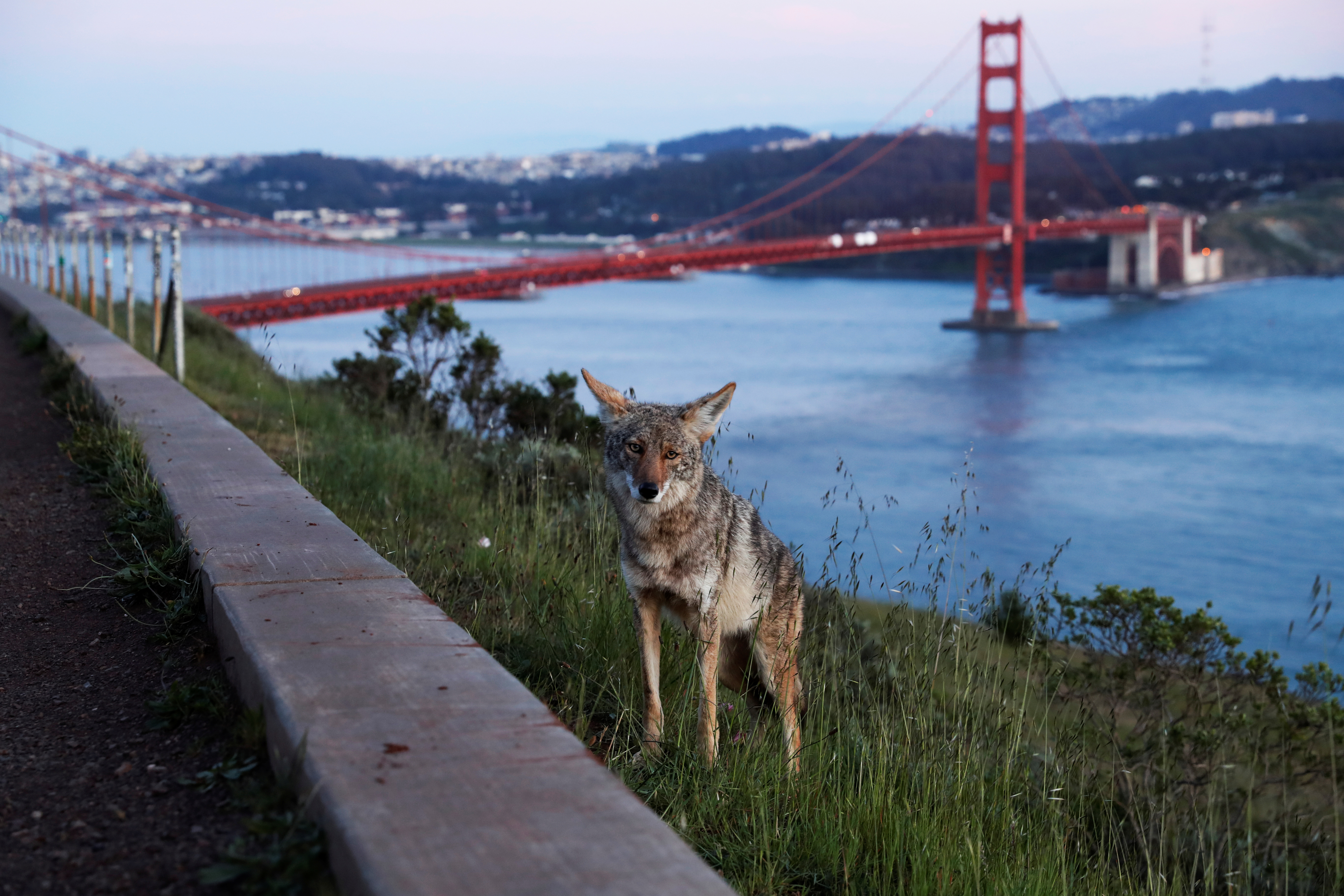 Hitting the Books: How the Mass Media Scapegoated Coyotes

AAs the boundaries between developed and wasteland continue to blur, the frequency and intensity of human-animal interactions will surely increase. But it won’t just be pandas and adorably viral pizza rats hissing on your porch – it’ll be 30-50 feral hogs in your trash and birds of prey preying on your precious Pekingese. Next thing you know your daughter is pregnant and the fine china is gone! But it wasn’t always like that, says Peter Alagona in his new book, The Accidental Ecosystem. It explores how and why American cities – once largely devoid of natural features – have exploded with wildlife over the past 150 years, even as populations have declined in their traditional habitats.

In the excerpt below, Alagona examines our long and complicated relationship with the coyote, a relationship that spans millennia and ranges from reverence to revulsion, a narrative now influenced by the hive mind of social media.

Urban adapters and exploiters may be prepared to live among people, but are people prepared to live among them? In the 1970s and 1980s, when coyotes began to appear more often in dozens of American cities, residents and authorities were unprepared and many were unwilling to welcome animals they considered dangerous intruder. As a teenage girl who lost her toy poodle to a coyote once said Los Angeles Times in 1980, “Coyotes are driving me crazy. They take care of our rats, which are really disgusting. But I hate coyotes. That same year, Yale social ecology professor Stephen Kellert found that, among US survey respondents, coyotes ranked twelfth from the bottom on a list of “most beloved” animals. , above cockroaches, wasps, rattlesnakes and mosquitoes, but below turtles, butterflies, swans and horses. The most popular animal was the dog, which is so closely related to the coyote that the two can mate in the wild and produce fertile offspring.

In his 2010 book Some We Love, Some We Hate, Some We Eat: Why Thinking About Animals Is So Hard, anthropologist Hal Herzog has written that “how we think about other species often defies logic”. This is not to say that our ideas about animals are arbitrary, but rather that the way we view them is shaped as much by history, culture and psychology as by physics, chemistry or biology. Without this social context, people’s ideas and actions toward other animals can seem absurd, hypocritical, or downright bizarre.

Animals are often presumed innocent or guilty – and therefore treated with respect or contempt – based on the baggage that our culture, through art, literature or tradition, has forced them to carry. An animal’s inherent or perceived qualities also matter. We tend to give the benefit of the doubt to creatures that are tall, that we think are cute, pretty, majestic, or humanoid, that seem to embody admirable qualities such as courage, entrepreneurship, or good parenting, or that at the very least Leave us alone. Yet such perceptions rarely reflect a species’ actual behavior or ecology. Many people view rats as gross or dangerous, although most rats pose little threat to most people most of the time. Cats, on the other hand, seem friendly and cuddly despite being ferocious predators and disease-ridden ecological wrecking balls.

Social and mass media play a particularly important role in shaping perceptions. When charismatic large wildlife began to appear more frequently in many American cities in the 1970s and 1980s around the time of Kelly Keen’s death, newspapers and television shows often adopted one of two following tones: irony or sensationalism. Ironic images and stories highlighted how surprising it was to see wild animals appear in supposedly civilized areas. Sensationalized stories emphasized conflicts between people and wildlife. They often used military metaphors about wars and battles or echoed the paranoid, racist and xenophobic tropes of the time, comparing wildlife to undocumented immigrants, gang members, criminals, terrorists and “super predators”. “.

These images were circulating in the media at a time when the proportion of Americans with first-hand experiences of wild places was flattening or even declining. During the 1970s and 1980s, consumer products and better infrastructure fueled the growth of outdoor sports, including non-hunting wildlife activities such as birdwatching and photography. Yet the technology that has enabled so many to enjoy the outdoors has also begun to insert itself into these same people’s encounters with nature, first mediating them and then replacing them. Video screens allowed Americans to spend more time watching virtual creatures and less time interacting with real animals. Animal-themed visual media have exploded in popularity, while zoos and museums have struggled to attract customers. Between 1995 and 2014, even the national park system saw its annual per capita visitation drop by 4%.

It is therefore not surprising that people who have encountered wild animals in cities have often reacted by treating these animals like the caricatures they read about in the news or see on television. To many, creatures like coyotes looked like cuddly animals or bloodthirsty killers. Neither image was accurate, of course, but both had real-world consequences.

When people who view coyotes suspiciously see them in urban areas, the first thing they do is often call the police. Police involvement tended to turn a non-problem into a problem or aggravate a bad problem. Yet it has been difficult to move away from a law enforcement-based approach.

As recently as 2015, New York City, which saw its first coyote twenty years earlier, still often approached these creatures as outlaws. In April, the New York Police Department, responding to an early morning 911 call reporting a coyote in Riverside Park on Manhattan’s Upper West Side, deployed tranquilizer guns, patrol cars and helicopters. The ensuing three-hour chase ended when officers failed to nab the fleeing dog. Asked about the costly and time-consuming incident, the NYPD contradicted a statement previously released by the Department of Parks and Recreation saying the city would no longer pursue coyotes that did not appear to pose a threat. It turned out that the two departments did not have a written agreement specifying this policy. NYPD officers were not trained in how to deal with coyotes, but it was up to them how to react. The result was predictable: the same excessive force that has plagued modern day policing in general was mobilized to combat a wild animal that posed little or no risk.

Over time, some towns and their residents have adapted to their new reality of living with coyotes. Jurisdictions with large budgets, supportive residents, and helpful institutions like zoos and museums have developed research, education, conservation, and citizen science programs. Some parks and police departments have begun to work together to develop new policies and practices, limiting the use of force and trying, with some difficulty, to respond only to genuine emergencies. One of the key messages wildlife officials emphasized was that the decision to initiate a response should depend on an animal’s behavior – whether it appeared injured or ill or was acting aggressively – not his mere presence.

As these messages spread, attitudes changed. In New York, as people have grown accustomed to living with coyotes, fear has given way to tolerance and even a tenuous kind of acceptance. In some neighborhoods, individual coyotes have become mascots with names, stories and social media accounts. Few people actually trust coyotes, and most people don’t want them prowling their backyards, schools, or playgrounds, but many communities have shown a growing willingness to hug their neighbors to fur.

As early as 2008, studies in suburban New York showed that most residents valued coyotes, enjoyed having them around, and even “find the likelihood of injury by a coyote acceptable.” But people’s willingness to live alongside coyotes in their communities quickly plummeted when incidents occurred, suggesting tolerance for them remained fragile. Overall, however, the longer most people lived with urban wildlife like coyotes, the more they saw these creatures not as threats but as natural and beneficial members of multispecies urban communities.

All products recommended by Engadget are selected by our editorial team, independent of our parent company. Some of our stories include affiliate links. If you purchase something through one of these links, we may earn an affiliate commission.