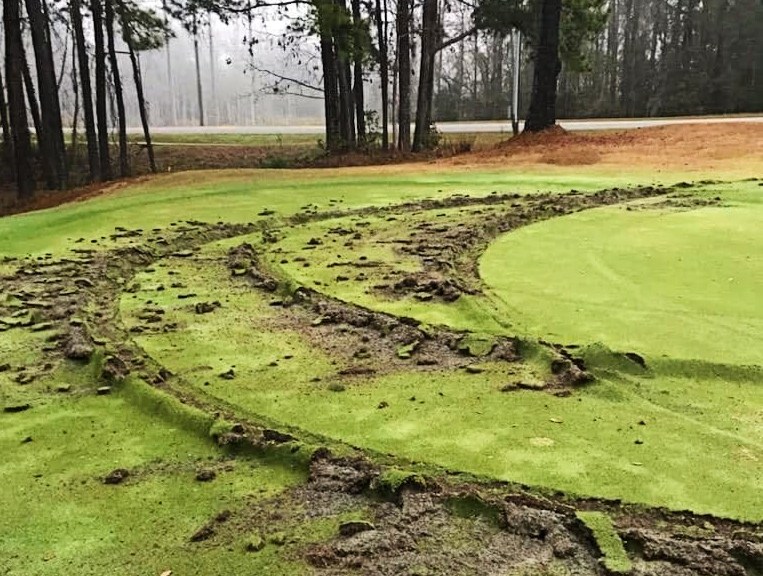 Talk about a mood swing.

On Saturday morning, owner Reagan Hobbs was alerted that the No. 11 green had been damaged by deep tire punctures most likely caused by a truck driving onto the course overnight.

“Our members are as generous as ever. And then for that to happen was like a punch in the gut for everybody,” Hobbs said.

“It stinks and it’s so frustrating.”

Hobbs is unsure of the extent and cost of the vandalism, although he said rebuilding a green can cost $25,000.

While insurance helps protect his club against property damage, Hobbs has been devastated for members, customers, staff and his maintenance team.

Hobbs said the course, located in northeast Tallahassee near Meridian Road, has seen an increase in players and members.

He also thanked the surrounding neighborhoods for their support of the club.

Golfweek’s Best 2021: The best public golf courses you can play, state by state

“We’ve gone three years without a major incident of vandalism,” Hobbs said. “We had a few minor issues. …. but someone gets stupid and does that, and it really hurts.

Green #11 is located near Summerbrooke Drive and Preservation Road near the water.

Hobbs posted two photographs of the vandalized green on social media on Saturday. He said the club were reviewing available camera footage and had also asked local residents for help.

Hobbs, who has owned the course for 18 years, said he was uplifted by the positive feedback. Course superintendent Bob Cook, who previously worked at Disney World and the Seminole Legacy Golf Course, also reassured Hobbs that the damaged green would be repaired.

“The answers warmed my heart and it makes me feel like we’re doing the right thing,” said Hobbs, whose wife Stacey is the course’s general manager. “Bob’s text said don’t let me bother, they got it and they’d make it right.”