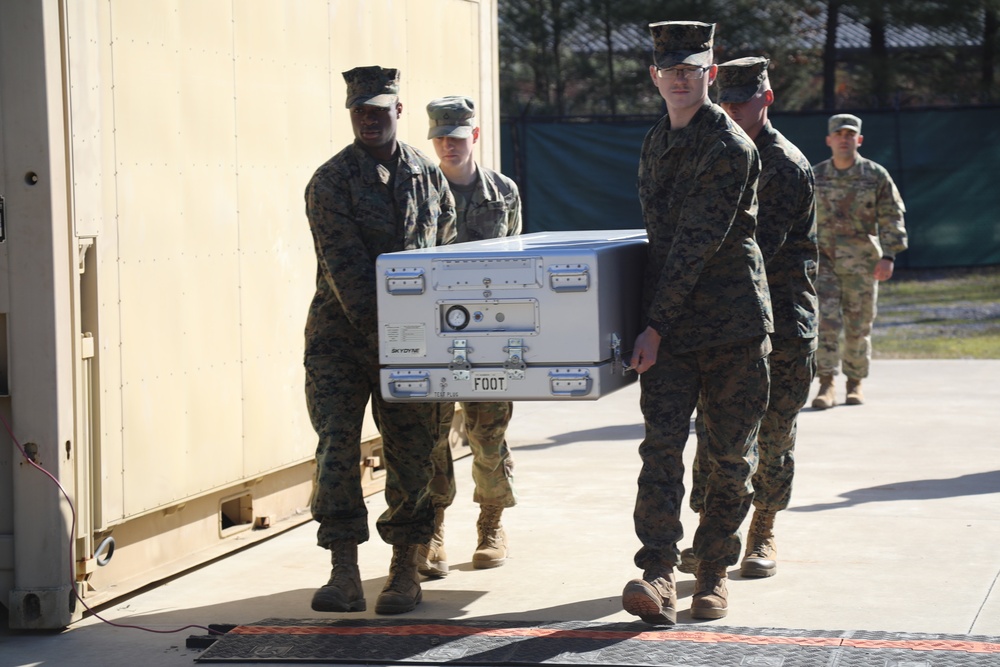 According to Sgt. Major Daniel Davenport, leader of the JMAC, the important new lessons to come from the 92M Mortuary Affairs Specialist Course will reinforce the use of current technologies and “bring it into the 22nd century”. Each will greatly improve positive ID capture abilities in the field.

“These two scientific methods will allow us to assist the Armed Forces Medical Examiner in making a positive identification before the remains leave the (operating theater),” Davenport said.

Under current procedures, the remains are sent to Dover Air Force Base, Del., where medical examiners make final decisions on identification.

The seven-week Mortuary Affairs Course trains soldiers and Marines to properly locate, identify and handle human remains and personal effects on battlefields and other environments. Students are also trained to assist with military arrangements and honors at burial sites.

JMAC recently received the green light from the Defense Health Agency to proceed with the integration of fingerprinting and dental x-ray courses into the 92M training curriculum, although full implementation could take at least three years in because of a rigid change process.

The inclusion of digital fingerprints and dental x-rays represents the most significant change in course content over the past decade, said William M. “Bill” Ellerman, director of JMAC.

“Before 2015, mortuary affairs specialists took fingerprints – but not digital fingerprints – in the operational environment as well as dental records,” he said. “In 2015 the rules changed as these tasks were removed.”

The armed forces medical examiner assumed responsibility for fingerprinting and dental X-rays seven years ago, Ellerman said. Today, given the likelihood of large-scale combat operations, and thus a greater mortuary mission, it makes sense to reintroduce these skills into course instruction so that Soldiers and Marines can provide greater functionality in the field.

“Looking at our peer and near-peer adversaries and what’s happening in the world today,” Ellerman said, “the potential for large-scale combat is always there, so we need to take the necessary steps to bring our skills – for 92M and (Marine Corps) 0472 – on par with the capabilities of our civilian counterparts across the United States”

In the field, quickly capturing information (such as fingerprints and dental records) leading to a positive identification can alleviate family suffering, Ellerman said.

“Getting this information as quickly as possible and putting it in the right hands for positive identification advances in the process of issuing death certificates, and therefore, pays death benefits, final burial or funeral rites “, did he declare. “Everything we do at the theater about this supports families.”

In addition to fingerprinting and digital dental x-rays, forensic photography tasks will also be included, Ellerman said. All three will be gradually added to lesson plans at the familiarization level.

“We are currently leaning forward and have started integrating them into the POI from a background knowledge perspective,” Ellerman said. “We want to do this as much as possible so that students – even if we don’t have the full range of equipment here to train them – can easily make the transition.”

Leaders in the 92M career field have been advocating for teaching fingerprinting since the year it was removed from lesson plans, Ellerman said. These efforts came to nothing until the arrival of Davenport, who brought unique perspectives to the argument.

“His experience and accomplishments are remarkable,” the manager said. “Very few 92-Mikes get to fill the positions he did. He was in the right place at the right time during the right operations.

Davenport, a former infantryman, was a first sergeant in the Defense POW/MIA Accounting Agency and was MA program manager for US Central Command and US Pacific Command. Prior to coming here, he was NCO Mortuary Affairs and Assistant MA Program Director, US European Command.

When he took up his post at Fort Lee, Davenport said he spoke with JMAC experts, commented on students and teaching, and developed a plan to make the most of student abilities against operational demands. . Within weeks, he spoke directly with the Armed Forces Medical Examiner, who then led the training.

“He brings credibility and the strategic and operational knowledge base and can speak the same language as senior leaders,” Ellerman said. “That’s what took this from what we’ve done since 2015 to a pull-up and take-off in 2022.”

Davenport said he was persistent.

“I tell soldiers all the time, if there’s something you’re passionate about and a change needs to be made because it makes sense and improves strength, don’t stop; don’t take no for an answer,” he said.

An effort to add an additional skill identifier to the 92M military occupational specialty and expand the civilian credentialing program is next on Davenport’s agenda.

The Quartermaster School’s JMAC 92M course trains approximately 200 students per year. These individuals continue to serve in one of two active duty mortuary affairs units based at Fort Lee or one of the many reserve elements located throughout the country. Mortuary affairs The soldiers are among those still assigned to missions in the Middle East.


This work, The Mortuary Affairs Course will undergo significant changesby Terrence Bellidentified by DVDmust follow the restrictions listed at https://www.dvidshub.net/about/copyright.