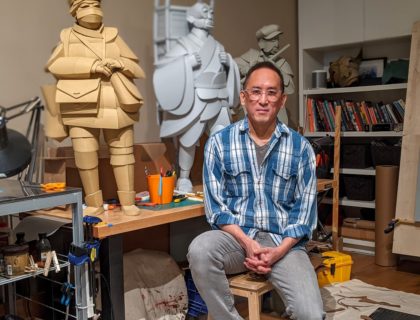 Warren King is new in the title “artist”. So new that he’s not sure he’s comfortable with it yet. He’s still trying to figure out what exactly that means. But anyone lucky enough to catch their cardboard man (more on that below) at Tribeca Park last week would be hard pressed to argue otherwise.

King (51) grew up in Wisconsin, destined from birth (his words) to take over his father’s structural engineering business after college. And he did, for a while. But with the internet boom came a job at a company that did data mining and analysis, and eventually a job as a technology consultant – “as far from art as you can get.” imagine it”. He and his wife, Rochelle King, raised their family largely in the Bay Area, moving on a whim to Stockholm for four years before landing in Tribeca a few years ago.

He was interested in art growing up – “I drew all the time” – but he considered it a hobby and never practiced it seriously, taking only a few drawing and painting lessons at school. university. Then, when his own boys were young, he made them cardboard Halloween costumes and masks. He realized he had a talent, and more so, his children’s schools realized he had a talent too. “So I started doing all their theatrical productions – I did monkeys, all kinds of birds, gorillas, horses, five or six complete sets of armor in the Chinese style, knights, airplanes .”

But during family time in Stockholm, her son issued a challenge. “He said I should do something for myself – and it never occurred to me,” King said. “I started thinking about it and I decided to do a trick and one thing led to another. I thought, who should I do? what is my inspiration for this?” At the time, he was thinking a lot about his family history, having visited China for the first time, and it all started.

“I had a really profound experience in China. People remembered my family – people we met in their town – and the memory of those people we met on the street was so precious. So I made some figures from photographs and personally it was very rewarding. The making process gave me a connection to them that I didn’t have before.

He came across a small collective of artists in Stockholm, and one of the advantages was to organize an exhibition of your work once a year. At that time, he had five or six figures, and people who had a gallery in town saw them and offered him an exhibition. One thing led to another and soon, it seemed, he couldn’t see himself going back to software – making art was so much more fun.

“It’s just happenstance and luck,” King said. “I never thought of myself as an artist – in fact, it’s been a difficult process to even learn what it really means. Before, my work was very data-driven and math-driven. There’s a project and you do it and you can measure success by the specs. Getting into art where you look at creativity and expression and get people to react – that was really alien to me.

So enter the number in Tribeca Park.

King wanted to try leaving one of his figures in a public space, but since they usually take two to three weeks to build, he sped up his process and launched one in three days to make it less painful if it’s ‘moved away’. He brought his villager out in the morning, on a bench facing the city center. Then he sat for a moment. Look at. Left. I came back around 9:30.

That’s when I showed up on a Citi bike, after my friend Julie texted me a picture. Two men who spoke Spanish sat across from him, and one of them found a QR code hidden in the back. We both took pictures, figured out it was a link to instagram. The three of us shared a moment – all awestruck – chatted a bit with hand gestures as I took my photos and then left.

Meanwhile, King was nearby, watching the two men stare at his figure for a long moment. People walked by, took a photo, maybe took a selfie, then walked. These two were among the few who stopped and really looked at it.

“Maybe it’s just a statement about our culture these days. But these two guys really got it. They spent a good 30 or 40 minutes there and had a great chat about it and seemed really moved. At some point I decided to tell them to take it, but I didn’t act on it.

Then they left. But before that, he noticed he had a new follower on Instagram – someone who only followed one person: him.

“When I had the idea to release one in public, my wife said, ‘what if someone takes it?’ The worst would be someone vandalizing it, but if someone took it because they liked it, I was okay with that.

Finally, King left too, heading for uptown. He saw the villager sitting there at about 6 a.m., and by 7 a.m. he was gone. He talked about it on Instagram. “I had mixed feelings because you don’t really know what happened.” A few minutes later, he received a reply to his message. “I liked your artwork, I couldn’t leave it in the park.” And with it a picture of the character in someone’s house. The working theory: that the guys saw him in the morning and waited until the end of the day to see if he was still there.

The king was delighted.

“It really made me think about what I do with all of this. Of course you want to sell or whatever, but at the end of the day you really want to connect with people. If he’s going to a a collector, nor is it there for others to enjoy.The accepted outcome for art is for it to go into someone’s living room and I prefer that.

King loved living close to Chinatown – an unexpected perk of settling in Tribeca. (“We knew the benefits of living in this neighborhood, but being new to New York, we didn’t know the depth of it, and then we thought oh wow, we’re so lucky to have landed here.”) and to following his time spent there is a new relationship with Pearl River Mart. He pitched them an idea for their gallery space in the new store, probably in February.

Until then, keep watching the streets for the next Cardboard Man. “That day was just a roller coaster. In 12 hours so much happened and it was very rewarding. I will definitely do it again. There is no better result that could have been in result.

Take out and cook or eat in, 21 ideas for Mother’s Day brunch in the Twin Cities

Books: the right state of mind