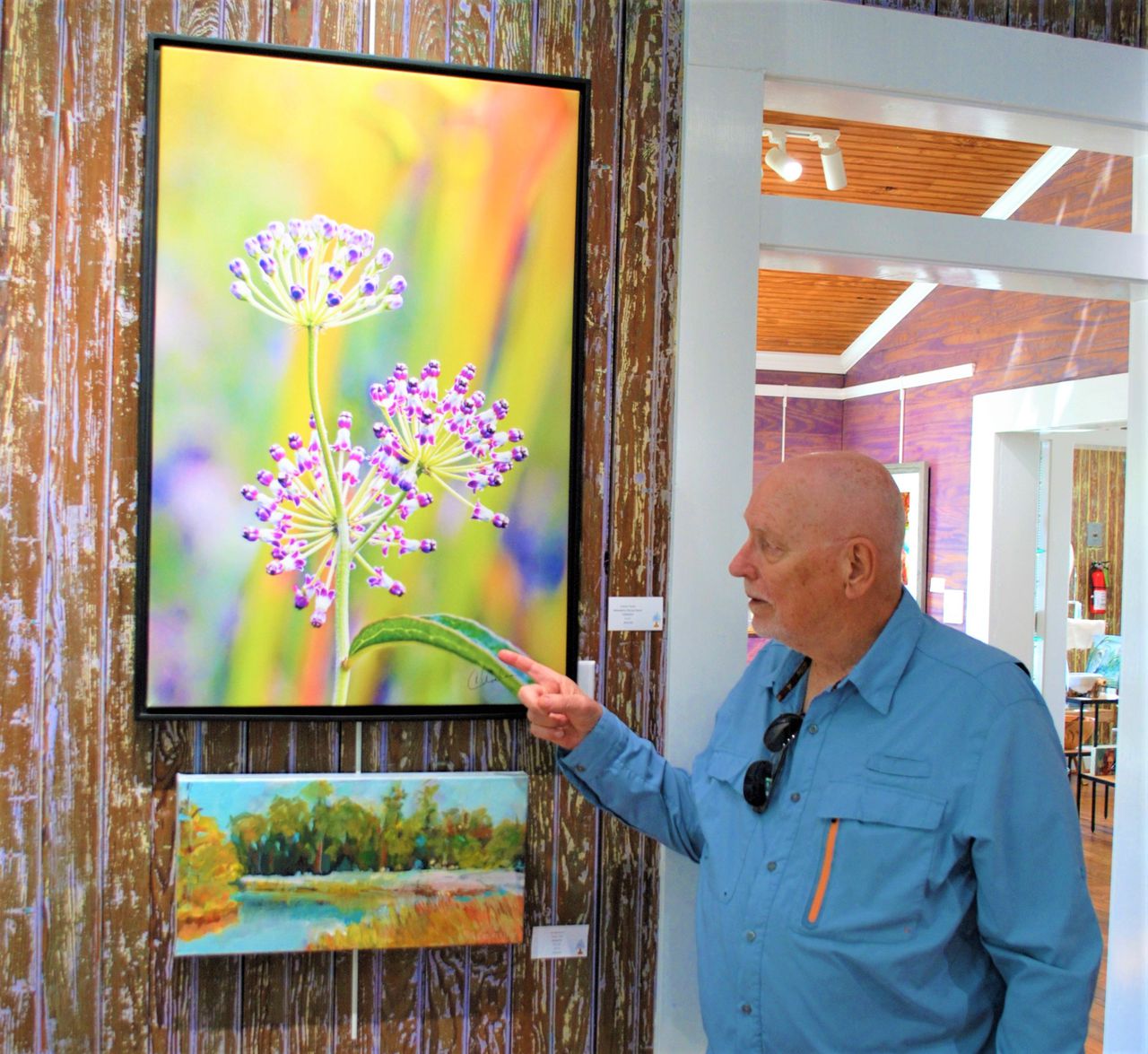 Charlie Taylor’s photographs are more than pictures, they are works of art

OCEAN SPRINGS, Mississippi — There’s probably no one in Ocean Springs who is more “sociable” than Charlie Taylor.

Taylor and his wife, Ginny – Mrs. Ginny for the most part – have resided in their Lover’s Lane home since the mid-1980s. Over the years, particularly during his retirement years since the early 1990s, Taylor has become a a staple of local cafes and pubs, where he and some of his lifelong friends hold court each morning with coffee and afternoons with cocktails.

Along the way, he made loads of friends, many of whom are 20, maybe 30 years younger than him. Taylor enjoys laughing and making others laugh, often at her expense. A few years ago, he came to the downtown Ocean Springs Halloween event dressed as Uncle Fester of “Addams Family” fame – with the light bulb in his mouth.

It is therefore somewhat strange that this man who loves people so much and is good with a camera in his hands hates taking pictures of people.

“I’m not interested in making people,” he said flatly during a recent interview with The Mississippi Press. “I did – high school pictures, wedding, all that, but I’m not really interested in it.”

But the subjects he likes to photograph become works of art.

Taylor, 76, was born in Laurel but spent most of his childhood and teenage years in Biloxi, where he graduated from Biloxi High School before moving on to the University of Southern Mississippi, where he attended the program Army ROTC.

In May 1967, Taylor graduated from USM, married Ginny, was commissioned a second lieutenant in the US Army, and received orders for Vietnam, all within two weeks.

He shipped to Vietnam on New Year’s Day 1968. With poor eyesight, he couldn’t get into a combat arms unit, so he was assigned to quartermaster. Arriving in Vietnam, he was assigned to a logistics unit in La Drang, where he was promoted to second lieutenant.

Taylor and his unit were there for the Tet Offensive. He recalled that his unit had killed 600 North Vietnamese over a two-week period, an experience he described as “rather horrific”.

Taylor says he remembers being interested in photography watching his father with an old Kodak, and later a Browning, as well as a college friend who had a Polaroid. But it was during his tour of duty in Vietnam that he first acted on this interest.

“I had R&R in Hawaii with Ginny,” he recalled, “and on the way home I went to this little PX and bought a camera and some slides and started working with in the little time I had.”

Ironically, a man whose work now features birds, plants, butterflies and beautiful landscapes along the coast took his first photographs in a war zone. Taylor said he still had all the slides he took in Vietnam.

Once back from his Vietnam tour, arriving in the United States on Christmas Day 1968, Taylor had to put aside his budding interest in photography, focusing instead on “building a career and starting a family.” He remained in the army, rising to the rank of captain, stationed at Ft. Gordon, Georgia. Taylor could have stayed in the army longer, but circumstances decided otherwise.

“They wanted me to go back to Vietnam, but I had lost faith in the leadership in Washington by then, so I walked out,” he said. He would remain in the Army National Guard, retiring in the mid-1990s as a lieutenant colonel.

Back on the Mississippi coast with Ginny, Taylor would eventually forge a career in the mortgage business. He notes that his very first loan was to longtime friend and Vietnam veteran Ron Skrmetta to build a house.

The Taylors would welcome two sons in the 1970s – JT, who turns 48 next month, and Jason, who is now 46. They have two grandchildren, Landon and Charlie – named after his grandfather, of course.

It wasn’t until he retired from the National Guard and the mortgage business that Taylor found his way back to photography.

“Ginny and I were at a flea market in Mobile,” he recalled, “and I saw a little Minolta camera and bought it. It cost $26. I took a film and I started teaching myself again.

Apart from a few seminars, Taylor is entirely self-taught. As his photography skills progressed, photography also progressed with the advent of the digital age.

“It was in the late 90s when I started doing a few photography competitions and exhibits, like the Ocean Springs Art Association exhibit and the Singing River exhibit,” he said. “I’ve won awards and I’ve done well, so it kind of progressed from there.”

He certainly did. Taylor estimates he has won 20-25 awards at various shows and prints of his work – produced on canvas, paper and metal – can fetch between $100 and $500, sometimes more. He is the only photographer among the artists featured at My Happy Place Gallery in downtown Ocean Springs.

Taylor said what he really liked about some of the awards he’s won is that they aren’t usually given to photographers. He is clearly proud of the fact that his photographs are more than just pictures. They are art.

But his passion for photography is not driven by awards or money.

“I just do it for fun,” he said. “The fact that I was able to earn rewards and make money doing it is just a bonus. What I love is what I call the ‘Wow!’ factor. I love being able to create something with the camera that makes people “wow” when they see it. This allows me to continue.

“I can take 100 photos and keep one. If it says “wow” to me, I know the colors and composition are good. If he doesn’t tell me, he won’t tell anyone else.

While Taylor has fully embraced the digital age of photography, he hasn’t abandoned ‘old school’ methods. Most of the images he shoots these days are taken with vintage lenses from the 1970s and 1980s that he adapted for a digital camera. All are manual focus.

Moreover, he insists that a photographer’s job is not done until there is an impression.

“Some people are happy to take a picture, post it on Facebook or Instagram or whatever site and that’s it,” Taylor said. “But I believe that a print is an integral part of photography. I don’t think it’s complete until it’s printed, whether on metal, canvas or paper.

He says his feelings for his craft are summed up in a quote from expressionist painter Camille Pissaro: “Happy are those who see beautiful things in humble places where others see nothing.”

But Taylor’s blessings go beyond her ability to “see beautiful things in humble places.”

Taylor admitted to considering putting his cameras away a few years ago, saying he felt “burned out”. But he credits My Happy Place owners Dr. Ray and Hyla Weiss for giving him a second wind with the camera.

“I was going to sell all my gear, drink more whiskey and put the ‘Gone Fishin’ sign on,” he said. “But I was at the OSAA awards show and Ray Weiss came up to me and said he was turning the cooking studio into a gallery and wanted me to be the featured photographer. alone,” he told me.

“I thought about it and agreed to do it. I’m glad I did it. It kept me going and was a blessing for me.

Her greatest blessing, however, has been by her side for nearly 55 years. Charlie and Ginny Taylor will celebrate this milestone anniversary in June. Army wife, mother, housewife, best friend and talented gardener – Mrs. Ginny’s garden was often the subject of her husband’s photos – she was Charlie’s North Star.

“She was my right arm, my rock,” Charlie said. “If it wasn’t for Ginny, I’d either be dead or in jail.” She’s just a tall, beautiful, wonderful lady. I’m lucky to have met her.

‘Do you think people are stupid?’ Sunak shrugged. Of course he did | Jean Crace