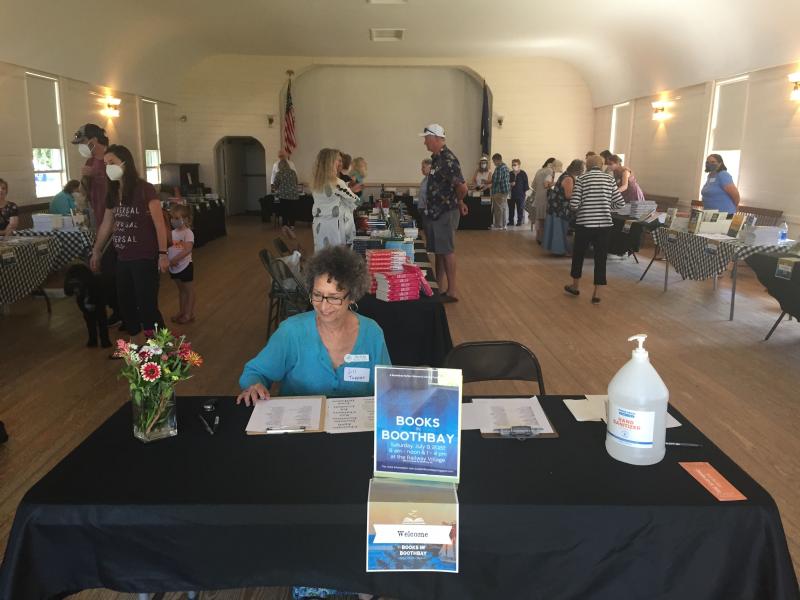 Of course, we all attend Books in Boothbay for the books, to meet some of our favorite Maine authors and talk about their new work ready and waiting to come home with us. But, really, each author’s life story is also quite an interesting read.

Sandra Neilly of Greenville (formerly of East Boothbay) and Westport Island was promoting “Deadly Assault – A Mystery In Maine #3” with a handout with chapter one and the first paragraph of chapter two along with his books. The first two in the series are “Deadly Trespass” and “Deadly Turn”. Neily loves the woods. Seeing only trees brings him great joy. It’s no wonder this self-taught novelist is a former Maine Woods guide who turned her experiences into novels.

“I started writing the books when I was still a Girl Guide,” she said. “I transferred my feelings about the woods into these books…through an unusual narrator: she is middle-aged and suffers from arthritis, and has a girl who makes ‘mom’ a multi-syllable word.

Neily created this mission statement for herself early on: “I want to take people to Maine Woods now — and in the future — so they won’t want to leave.” “A lot of forests are at risk and most people don’t realize it,” she said.

These “deadly” books blend Maine’s fishing, hunting, politics, and backwoods into murder mysteries and have drawn male readers to follow her to Moosehead Lake and other areas.

“I wanted to write a page turner,” Neily said. “One that would have people in bed reading at 2 a.m. texting me, ‘Damn you’.”

Did she get those text messages? “Yes, I did,” she replied, smiling broadly.

children’s author Hillary Dow of Lewiston has been writing and illustrating his tales for four years. Dow’s illustrations are all made of felt – and all of the sheep’s wool used to create its needle felted illustrations is sourced from local farms. Hence its slogan: “From the farm to the library”.

Dow said, “My goal is to write and illustrate, with wool, a new book every year – in paperback and hardcover.”

Before she began writing and illustrating children’s books four years ago, Dow put her writing ambitions on hold to focus on her marketing career, her marriage, and raising two school-aged children. She told herself that she would write and illustrate books when she retired. Luckily for young readers, she’s progressed through this timeline and started fulfilling her dream of writing — and uniquely illustrating — children’s books now.

The adventure of her latest book, “Fairy Spells and Strawberry Elves,” begins when the mermaid Viève discovers a seashell that turns out to be a portal to a woodland fairy called Lichendia. And, when she passes through the shell in this country, she too is a fairy. Viève helps the fairies wake up the Strawberry Elves. Why are they sleeping? What kinds of spells and potions will they make and from what? You’ll have to buy a copy to find out — and, Dow said, at the end of the story, there’s the “World’s Best Strawberry Shortcake Recipe” waiting to be conjured up!

“In all, I worked on ‘Fairy Spells and Strawberry Elves’ for six months,” Dow said. “I can do one illustration a week – when I’m up at 4am and felt from 4:30 to 5:30, I have another book coming out in August, ‘The Sun Fairy’, and a new one that’s half illustrated.”

Kristy Lageroos was there with her first published book, “Candice and Lucy at the Halloween House” – an exciting event in any writer’s life! Lageroos is a myofascial therapist who taught children’s theater. She started out writing children’s plays and moved on to books – and a few are aimed at adult readers.

The inspiration for the book with her at the event came from her daughter. “She came home from kindergarten one day and said that her friends had told her not to play with a certain boy in their school because he ‘was different’. I asked my daughter if she listened to them. She said: “I told them he didn’t have many friends and I was going to play with him anyway.” I thought that was so brave of her…so the main character in the story faces a similar dilemma.

Lageroos, who loves the energy of children, said it was quite exciting to publish a first book. And there’s another book on the way; in fact, “about a million on (his) computer”.

“I spent nine years reading every history book I could find by Maine authors on Swan Island before I started writing,” Parker said. “I sent the manuscript for the first book to the publisher in 2018. My goal was to get it published before my dad died – and he was able to read it cover to cover,” Parker shared. who grew up on Swan Island with her grandparents. who were its guardians.

“As a child I had a rare bone disease…my joints were very weak and I was diagnosed as terminal when I was 10. I had to be carried everywhere. We were the only three people in live there. My grandparents told me that Swan Island was magical – and it was. Is. It’s where I learned to journal, write stories and develop my writing skills I was homeschooled and when I was well enough he took me by boat to the mainland and then came back and picked me up to go home.

Ellen Booraem of Brooklyn has been an award-winning journalist for 30 years. One day she decided it was time … let’s dive into fiction! Booraem’s “River Magic,” his fourth foray into fantasy, won a Maine Literary Award. “River Magic” is intended for children of school age.

So how does it work for her, writing fiction as opposed to reporting on real life? What does its process look like beyond basic research?

“I start with the fantasy character or characters, in this case it was a dragon and the person riding the dragon,” she said. “Then I think of a problem that kind of character would have, and then a problem that a kid with a similar or contrasting problem might have (have),” Booraem explained.

“The story becomes the child’s story, but with this one, the child character started off angry, but as the story progressed, she wasn’t angry anymore. That’s what sometimes happens when you’re writing: your characters don’t turn out the way you’d hoped – they have their own minds.

And, yes, she’s working on a new book. This one is about a child whose mother is a valkari. Does this look like a possible power struggle?

Sarah Carlson – For this retired primary school teacher, poetry and photography have been a saving grace. His poems, always complemented by one of his photographs, are relatable and go straight to the heart of life and life. She found poetry, or maybe she found it, as she faced the sudden death of her husband. Writing poetry provided her with a way to express her emotions and thoughts, to navigate the powerful change in direction her life was taking. In April 2020, “In the Currents of Quiet” was published about loss, discovery, healing and health written over 14 years.

“Many people have told me that they keep a copy of a book on their bedroom table and open it when they need edification or a glimpse of grace or healing” , said Carlson.

Her first book, “The Dragonfly,” was a self-publishing venture, followed by “The Radiance Of Change” in 2018. Carlson wrote the book of poems, along with her photographs, for 12 years. She began writing the upcoming “Tender Light Softens” during the pandemic, putting to paper thoughts on retiring from teaching, becoming a grandmother, losing her mother, “all the things life brings and connecting with ourselves and the loss of life and all that it contains.

Hilary Bartlett, the West Boothbay Harbor-based author-artist-scientist from Liverpudlian was back with his hugely popular book, “The Thistle Inn: A Wee Bit of Scotland in Maine.” While this book was a pleasure to write as she took over thmagic dare years of The Thistle Inn at Boothbay through her memories and those of the many other colorful patrons, her new book, released in August, showcased all of her talents.

As she explored the different types of mushrooms here on the Midcoast, she wrote using her own sketches, researched extensively, and experimented with new recipes and enjoyed familiar recipes in her kitchen. Art, science and cooking are heaven for Bartlett. Look for him at next year’s event for an autographed copy – but, why wait, right?

Books In Boothbay will return to Boothbay Railway Village next July with more Maine authors.