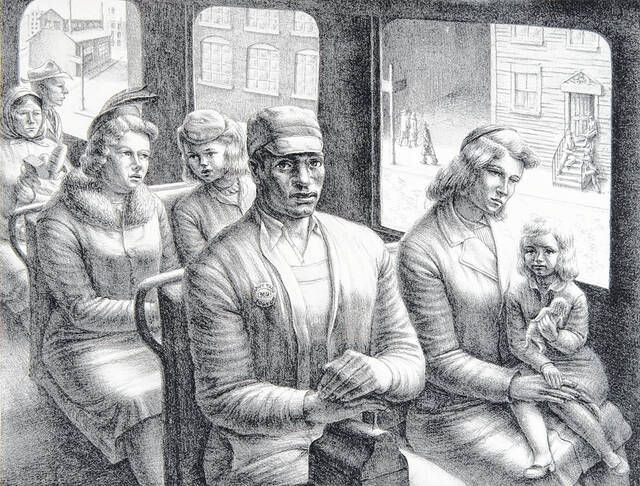 When a viewer asked Kas Williams which piece of art spoke to her the most, Williams led the way through Misericordia University’s Pauly Friedman Gallery and stood in front of “Streetcar Scene.”

John Woodrow Wilson’s 1945 lithograph depicts a black man, dressed for work at the Boston shipyard, and sitting so straight on a streetcar, as if determined not to lean into the white woman’s space seated next to him.

“It reminds me of a handsome dark-skinned young man who told me he hummed a Beatles song when he walked past white women, so he didn’t sound threatening,” Williams said. “It reminds me of how when I was growing up my mother said we couldn’t separate in front of white people. We had to be very wise and we had to work twice as hard.

Williams, who is the university’s associate vice president for mission integration and institutional diversity, wasn’t the only person admiring Misericordia’s artwork on a recent Saturday afternoon.

Dozens of other people attended the opening reception for an exhibit of African American art, all on loan from the Harmon and Harriet Kelley Collection of San Antonio, Texas.

The 40 pieces, some of which date from the early 20th century and others created much more recently, will remain on display at the Pauly Friedman Gallery until April 10.

Here, visitors will find works by Alma Woodsey Thomas, who became Howard University’s first fine arts graduate in 1924; John Thomas Biggers, born in 1924, who trained as a plumber before turning to art, and Henry Ossawa Tanner, son of a former slave, who moved to Paris in the late 1800s to pursue his artistic career away from the discrimination he faced in America.

Pieces on display include Ernest Crichlow’s 1940 depiction of “Anyone’s Date”, a woman in a bright red dress who might have stepped out for a night out at the famed Cotton Club; Hale Aspacio Woodruff’s “Sunday Promenade,” where a group of people appear to be on their way to church, and Biggers’ 1965 play “Morning’s Here, No Dawn,” in which an older man in overalls covers his face with work-worn hands, as if still tired. Or already tired.

“Every image tells a story,” Williams said, admitting that she finds “Hands Up, Nimbus” particularly poignant. This 2020 coin features a young black man with his arms up and a halo around his head.

Artist Curlee Raven Holton, who put a trail of her own blood in the bottom corner of the subject’s shirt pocket, noted that “the golden halo represents respect for the subject’s worth. Before halos were religious symbols, they represented heroism and bravery as well as the unique value of each individual. The main image is done in watercolor with the hands in gray with white space. This segmentation of the image refers to the barriers that perpetuate encounters between blacks and whites.

Another piece that Williams found particularly noteworthy was Alison Saar’s “Black Snake Blues,” which depicts a woman lying on a bed and cupping her breast, with a coiled snake nearby. Some white visitors to the gallery thought it might represent Eve and the Serpent in the Garden of Eden, but Williams had another thought.

“There have been times in history,” she said, “when black women breastfed white children.”

Being forced into such an intimate interaction, which could have starved one’s own child of nourishment, could account for a particularly haunting feature of the woman’s face.

“Just look at his eyes,” said Lillian Caffrey of the Wyoming Valley Art League, winking at two vacant spaces with no irises or pupils.

Admission to the gallery is free. Hours are 12 p.m. to 4 p.m. Monday through Saturday or by appointment. Free tours led by gallery director Lalaine Little are available on request.

To schedule a private visit or appointment, or for more information, contact Alexandra Svab Isaac at [email protected] or 570-674-8422.

The Best Cocktail Books for Music Lovers and More – Billboard