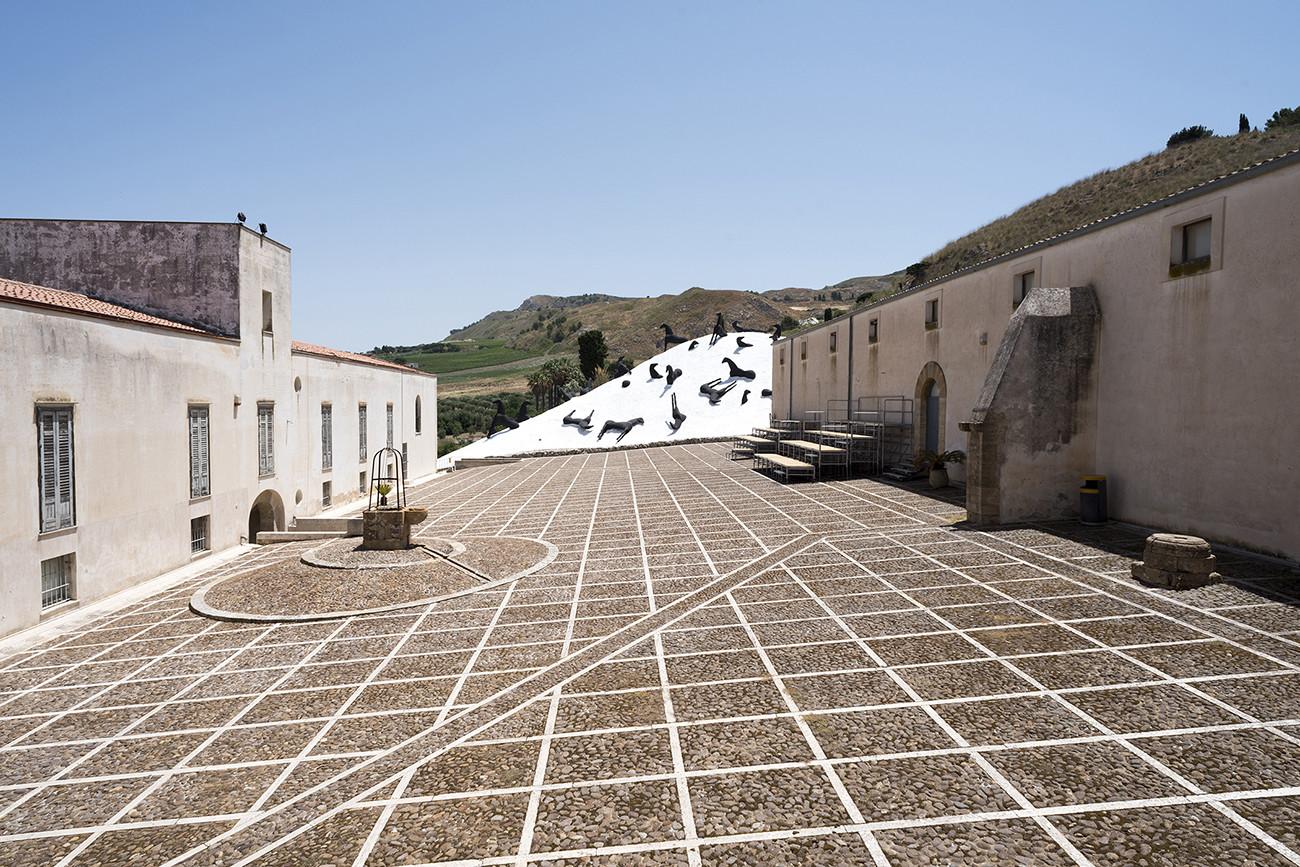 Waiting for the biennial of the international festival Gibellina Photoroute in 2023, let’s take a walk among the photography exhibitions, works of art and museums of this small town in western Sicily, which is reborn under the sign of art (photography included), after the catastrophe of the 1968 earthquake.

We enter Gibellina, which is a real though conceptual place, through the monumental gate called the Belice Valley Gate (also known as Stella (star) of Belice) by Pietro Consagra. The city as a whole, as well as Ludovico Corrao Museum of Contemporary Art (MAC) and the Museum of Mediterranean Motifs are among the most original cultural experiences of the second half of the 20e century. And the urban center is an open-air museum (with works by Consagra, Quaroni, Mimmo Rotella, to name just a few of the artists who “signed” the revival of Gibellina), while the rubble of the old town are hidden under Cretto (The big crack) by Burri.

As far as photography is concerned, our visit begins in Baglio di Stefano (headquarters of the Fondazione Istituto di Alta Cultura Orestiadi): located close to the city, it is an example of the typical farmhouses of the region. The Museum Mediterranean patterns preserves the Foundation’s collection of contemporary art, with works documenting the artists’ stay in Gibellina and their contribution to the city’s reconstruction project (i.e. Arnaldo Pomodoro’s spectacular machines for the Orestiadi, or the works of the Italian artists of the Transavanguardia) as well as the Permanent Collection of photographs of the Foundation.

From Beirut and Aleppo to Baglio Di Stefano

The Fondazione Orestiadi, in memory of its founder Ludovico Corrao, presents two initiatives: in Palermo, in collaboration with the Fondazione Sant’Elia, and in Gibellina. Thus, Baglio Di Stefano hosts the exhibition From Beirut and Aleppo (organized by Francesca Corrao and Enzo Fiammetta) by Lebanese ethnologist and photographer Houda Kassatly. His images trace the recent history of the Lebanese capital, from the end of the civil war to the aftermath of the explosion of August 4, 2020 and document the destruction in Aleppo (Syria) during the war with a series of photos taken in 2018 for UNESCO. What remains of Aleppo reflects the ancient architectural splendor of the Mamluk sultans (13th-16th century), with shadows cast on walls or rubble strewn across the floor, shreds of windows overlooking dead-end courtyards. In war zones, there is no future in sight: almost everyone is gone, perhaps forever. On the outskirts of Beirut, the houses have been emptied to be rebuilt elsewhere: deserted rooms, no sign of life, only elegant trimmings of the former prosperity.

Fotografia Spazio Aperto is an open call promoted by Triennale Milano and Gibellina Photoroad/Open air & Site-specific Festival; it deals with the reinterpretation of public space and temporary in situ developments (the emphasis is on one of the most emblematic squares of the city: the Piazze System, designed by Franco Purini and Laura Thermes). A photographer and an architect, selected by the jury, will spend a residency at Gibellina to design an outdoor and site-specific installation to be held during the 4e edition of the Festival (July 28/September 30, 2023). The workshop Curatorial practices in the public space, in Milan at the Triennale, is also planned. Deadline September 9, 2022 (gibellinaphotoroadfestival.com, triennale.org/news)

Ruins and rebirth: this is the link between Gibellina, where art was able to heal the wounds of the people after the earthquake, and Frida, who healed the wounds of her life thanks to creativity and painting.

Our photographic journey continues at the MAC (the Museum of Modern Art Ludovico Corrao), where the exposure Frida Kahlo, ritratto di una vita is exhibited in the Mario Schifano rooms of the museum: his portraits, taken by masters of photography (including Imogen Cunningham, Edward Weston, Lucienne Bloch and Leo Matiz) tell of his life, his art, his friendships, his loves and dialogue ideally with the paintings of the protagonist of Italian Pop Art. B&W plans (and some in color) tell the story of Frida’s life from her childhood until her meeting with the Mexican artist Diego Rivera, and until her death. Also on display are some photos taken by her father Guillermo Kahlo, a well-known Mexican photographer, who immortalized her in her intimate dimension. The exhibition, promoted by the Municipality of Gibellina and organized by Diffusione Italia International Group, is curated by Vincenzo Sanfo and Tanino Bonifacio. But whoever enters the MAC, in addition to the works of major contemporary artists, can discover another treasure, photographically speaking: the permanent section of photography, with the works of some great photographers (Mimmo Jodice, Letizia Battaglia, Arno Hammacher, Mario Giacomelli , Maria Mulas, to name a few) who told the story of Gibellina, the earthquake, the art, the reconstruction.

Waiting for the new edition of Gibellina Photoroutethe “photographic” route takes us to Piazza del Municipio, with the Gibellina Selfie – Lo sguardo di tre generazioni (The view of three generations), created for the city as part of the 2019 edition of Joan Fontcuberta’s event. It is a mural photomosaic representing the eyes of three inhabitants of Gibellina of different generations. It is made up of 6075 ceramic tiles with the selfies and photos that the inhabitants of Gibellina sent to the artist, in response to a call on the web. He recomposed them, recounting the present time and its continuous flow. “It’s a way of transforming the individual use of mass photography in the age of the web – the selfie as an individual representation of oneself – into a moment of collective identity construction, a self-portrait of the life of a community” , said the artistic festival explains the director Arianna Catania.

Paola Sammartano is a journalist, specializing in arts and photography, based in Milan.

Arctic Monkeys’ Reading Festival 2022 Set is one of Storybook | Live